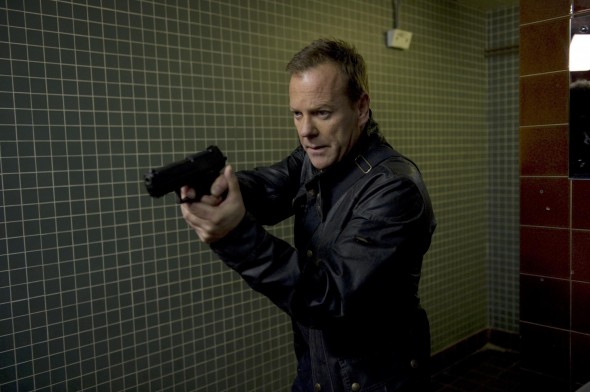 Fans of 24 have been waiting to hear if the action series will be returning for a 10th season since the end of season nine last spring. According to the Telegraph, FOX may not be the one pulling the plug this time.

In an interview, series star Kiefer Sutherland expressed doubts about returning for another round of 24.

But the Jack Bauer character is not dead, so has Sutherland moved on?

“Me, I don’t see going back to it. We had set out to do 12 episodes to end the show and deal with some of the past history of the show. It was also an irresistible opportunity to go shoot in England. So for all of those reasons it made sense to do that last season.”

But with no Kiefer there is no more 24. He can sense that I am a little shocked to hear him reveal that one of TV’s longest running series is, finally, finished. That also puts to bed all of the long-standing rumours about a feature film. There’s a pause and then that chuckle again.

“But I think I said the same thing at the end of season 8 so I would hate to be held to that.”

What do you think? Is it time to say goodbye to Jack Bauer and 24? Would you watch a 10th season? How about without Sutherland?

Season 9 is one of the best ever. The series can’t stop this way. I want Jack back. I need him back, like so may others. 24 can’t exist without Jack Bauer. This is not “Game of Thrones”, or any other series. This is a one person adventure. You live with Jack every week from day 1 till day 12 (24). Jack will be back and I will back him up.

Bring back Jack, AGAIN!!!!!I have watched every episode live since the the first hour of day 1. This show was a great escape from things that werent going well in my life. This show was there for me to just get away, its that gripping. There is still a story to be told. I am sure many loyal fans would agree. THE CLOCK SHOULDN’T STOP!!!!!

Agree with all who say “24” is dead without Jack. “Live Another Day” is so very different from the original seasons, new viewers need to realize they need not “catch up” to start watching this tremendous new format. Said it before, everyone associated with “24” shared so much geopolitical truths with us that, at the time, we didn’t realize it. Now, he’s in Russia! Perfect timing for these geniuses. Show can’t do without the trio of Jack, Chloe, and Kate. Tony? Did he rise from the dead? This show has even more than one more “day” left in it. Just… Read more »

24 should be mixed with Interstellar. The action on Earth would be in normal time but on another planet people would move super-slow. Then on another planet, people move fast like Benny Hill.

But then you’d have a half hour of commercials on the Benny Hill because it’s all done in 24 minutes….

I haven’t watched SNL for quite a while but I’m guessing they must of spoofed them a time or two. It’d be an easy show to spoof.

Keep it going ; it is still pertinent; well done across et hbaord…

Good use of “pertinent” – for it’s exactly that. Remember Season 1, especially, and the next couple of years that shocked us all and seemed far-fetched. Watch the early episodes doubters, then tell us what’s far-fetched! Truths on a silver-platter.

Would Love to see another full 24 . Love each season. But got to have JACK B.

I think Kiefer should come back for a tenth and final season of 24. The ending was good but no one wants to see Jack in Russia forever. We’re about the same age, so I understand how he could be so tired. After that, I think they should come up with a new strong lead and add more characters. The lead should be a well established actor that has a good following and has done action movies/tv already. Hopefully, that should make it a success.

Other shows have gone well beyond 10 years and without a 4-year absence. Kiefer is only 47; his dad, Donald, much older and still acting.

24 is not 24 without Kiefer playing Jack. This show is such a snapper! At least Kiefer left himself an out about it being the end for sure. We can’t have it end with Jack being taken by the Russians, not after all he has been through and got through. Hurry back Jack, you fans await you!! And yes, bring back Chloe and Kate did grow on me. Yes, Tony too!

Jack Bauer is not like James Bond with different actors who play James Bond. Kiefer Sutherland is Jack Buaer that how it is. Another actor play Jack Bauer sorry 24 would be cancelled or down the drain.

Not another Jack Bauer, but easily another agent who is in his 30’s could quite easily become the new action packed hero who does more in 24 hours then many do in 24 months. I mean the part really doesn’t require a lot of acting because it’s mostly action. I’m pretty sure if they found the right guy, and the right script that people would adjust to a new 24 hereo quite fast once the action starts and each hour leaves a cliff hanger…..Which is why i usually wait until it’s released on DVD, I hate waiting every week to… Read more »

I would love to see Kate Morgan and Chloe sent to Russia to save Bauer. Maybe only have Sutherland guest star in the last episode as he is being rescued. This could lead into a spin off series starring Yvonne Strahovski’s Morgan as the “new” Jack Bauer.

I’m always a huge fan of 24 since the very beginning and it definitely got me hooked. The ending was OK in my opinion but they should give Jack Bauer a proper “happy ending” instead of turning himself over to the Russians ever since the events of Day 8 and he would have gone back to L.A. to finally see his daughter Kim. With Fox still sinking, they should bring back 24 for a tenth and possible final season and the series could bring back not only Jack Bauer but Chloe O’Brian and possibly Kate Morgan and Tony Almeida and… Read more »

You’re dead wrong Alan. Tony Almeida is still alive at the end of Day 7 even though he turned into a bad guy since the start of that day. You may get the 24: Live Another Day on Blu-ray that has one of the special features titled 24: Solitary in which Tony is now a prisoner whose now on trial. Have you not been watching 24 lately or perhaps I’m going all Jack Bauer on you even if it means TORTURE.

I’m pretty sure he’s dead too. It’s been a long time, but I seem to remember they allowed him out of prison to help trap someone who turned him in the first place. If I remember right they even made his death a noble sacrifice as a send off instead of going out as just a dirt bag traitor. But like I said it was several years ago so I’m a bit fuzzy on the details

Tran I agree whole heartedly, but I think as Alan replied that Tony is dead. I don’t know why Hollywood/writers/producers.. what ever… don’t like for drama characters to EVER be happy. Jack deserves some happiness & to get some respect from his country & those who run it. Such heroes do live in real life & often go un noticed or unknown for decades. Plus those fans such as myself whom have watched from hour one day one likely keep watching because we love Jack!!! We like how his daughter has matured & would like her to get her Dad… Read more »

No Keifer Sutherland – No Jack Bauer – and NO 24. He either reprises his role or it’s the end. Nine was great and would love to see 10, 11, 12, + come out. I hope he changes his mind and decides to return, but if he doesn’t . . then 24 is truly over. A new cast can never be Jack Bauer. Too bad he didn’t have a son on the series that could have continued it. Hope to see 24 and JACK BAUER make some new seasons.

Say it ain’t so Jack. Come back, we need you.

Yes he’s getting a bit long in the tooth for the series. That doesn’t mean the show can’t get new life into it by new characters, new ideas, show runner and the rest. Like the Bourne series. It can be a spin off with a different hero from the same concept. If so I’d like to see the great action, but I’d like to see the new hero treated with respect. Jack Bower was constantly treated like an enemy of the state after he saved millions time after time. That just felt wrong. Especially in light of how often the… Read more »