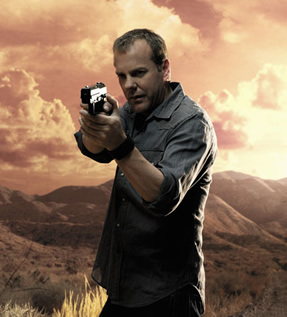 It’s been suspected for awhile that 24 could be in its final season but the word is now official. The FOX series is ending after eight seasons on the air.

The ratings have been in decline for awhile but, like most shows that have been on the air for a long time, the production costs have been rising.

Word of the show’s cancellation started to seep out earlier this afternoon. Director and Executive Produer John Cassar tweeted, “News from the 24 set, the crew has been told that 24 has come to an end. There will b no season 9. Its been a great run, thanx all 4 watching”

The official word came down that the TV series is ending by mutual decision of executive producer Sutherland, executive producer and showrunner Howard Gordon, Twentieth Century Fox Television, Imagine Entertainment and Fox Broadcasting Company. The current season will continue to air on schedule and finish off with a two-hour finale on Monday, May 24th.

Of the series’ end, Sutherland tells the LA Times, “We’ve done eight years we’re very proud of, and we’re very excited about going into the film world with this… It’s very sad, the only thing tempering this from being all-out heartbreak is the fact that we have this sense of accomplishment. That’s the only thing holding people up. Because, for me, and all these people who’ve been with us since the beginning, it’s a very special thing and it’s very sad to see it end.”

There was talk of another network possibly taking the show on, most likely NBC, but that seemed unlikely considering the show’s age and costs. Sutherland tells TV Guide “that was never a real possibility for me.”

Instead of another season, Jack Bauer and company (depending on whoever survives the final episodes) will move directly into feature film mode. Sutherland says, “The hour-by-hour, episode-by-episode dynamic that made for such a thrill ride on television tied us down creatively. In real time, our characters can’t move around. But in a two-hour representation of a 24-hour day, all of a sudden, Jack can get on a plane and fly from South America to Russia to England, and still have time to save the day in Washington.”

A script that would take Jack to Europe has been in the works for awhile and shooting could begin as early as this summer.

For now, fans are left to wonder how the final hours of the 24 TV series will wind down. It’s safe to say that Jack will live to see another day. Sutherland says, “What I do like about the ending and what I can say about it is that it’s very definitive about where Jack is going to end up. It can be perceived as a cliffhanger on some level, but there’s no questioning his options. That’s something we’ve never been able to do in the context of this series.”

Gordon says he toyed with how to end the show for years and didn’t count on the emotional impact that writing it would have on him. He says that the script was two days late and he just didn’t want to let it go.

That finale script includes a role for Eriq La Salle. The actor, best known for his role on ER, will play a “regal and charming UN Secretary General” in the final pair of episodes. You may recall that this was the role that was being cast recently with an alert from casting that these would be the final episodes.

What do you think? Are you sorry that the show’s ending or do you think it’s time for it to end? Will you see the movie?

Awesome Show, sorry to see it go:-( Will see the movie)

My wife & I were completely absorded watching all eight seasons over the last few months. Our daughter & her husband had us watch season 1&2 and we bought the whole set of eight. I am 59 and we have to say that this is one of the greatest moves that we have watched. I am sad that this had to end this way. Please dont sell out for money.
Please keep this going.

I am sad to see 24 being discontinued. I looked anxiously after january to see what Jack will get into this time….or he should give up on the good old USA ,the more he is tortured the more they want to lock him up….something not right. I thought he should find an island somewhere and have a real life ,if possible. I hope they will change their minds…its a different touch to series on now…and no one has been able to copy cat it…. thanks jack

My wife and I were completely completely absorbed watching all eight seasons over the last few months from Netflix. I don’t know how we will survive withdrawal. The acting was so good, the dialogue so concise, the situations in the White House, CTU headquarters, action scenes so realistic, the plots so well developed and always the unexpected turn of events never anticipated. Surely such a formula for a successful series can’t be abandoned. Please give us what we crave, more Jack Bauer, or at least a new format with the same creativity and dedication.

I didn’t start watching it until I got Netflix. Boy did I get hooked!! I just needed to see the first episode so I could put everything in place. I have watched every episode through Season 7. Now I am waiting for the DVD of Season 8. Absolutely great action, such intensity, and fantastic acting!!!!

24 please come back i can’t live without u.

I am a real Fans of 24 and agree with this comment , I want 24 come back . Yes , the story should be continue. Please come back.

I am very very very sad and disappointed with fox to not negotiate a new deal that would keep 24 on for another 5 to 8 yrs i kept waiting for the commercial to show 24 this was my show i never miss an episode now i have nothing else to watch to all the casting crew thank you for 8 seasons of great acting i love it so much and i will never change that for anything.I still believe fox should give fans like me another chance of 24. Thank you thank you GOD BLESS ALL.

This was an exceptional series
However I disagree with rox.
Taking in consideration that
show aired late in week night.
Like many working Americans.
We could not watch consistently.
So we always purchase full season
on DVD and watch all episodes.
So really should tdke pole on DVD sales.
& compare shows true popularity.
There should be another season , last
episode left you wondering & wanting
more!! Fox should reconsider.
Thank you! Abby & Robert

i am serious this awesome show is coming to end.

Why is it that you guys always get rid of the “Great” shows. Will there be a “24” Movie?

Yes I am sad as it was the best show on tv and felt it could of went on for a few more years.

Its so so sad

I really hate to see 24 end i could not wait for the show to come on it was one of the best tv shows i have seen in a long time. Sure hope someone reconsiders this as it was something i could not take my eyes off from, hope to see it return.