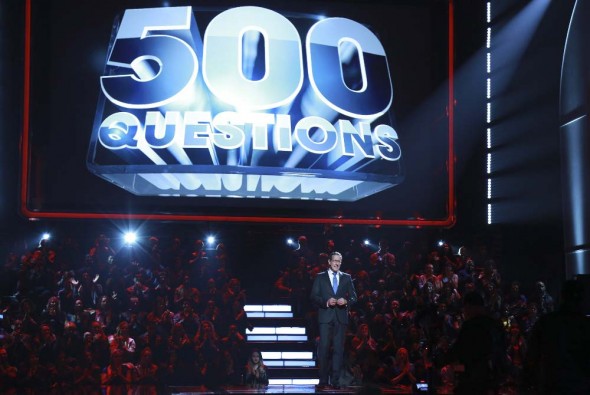 The games is played by two people at a time; one watches and waits while the other answers questions and earns money. A contestant has 10 categories with five questions in each of them. Once a question is asked, the contestant has 10 seconds to answer — and can offer as many answers as they can within that time. Once the correct answer is given, the clock stops and resets.

There are also several special questions in the game.

In the “Battle” question, both contestants take turns answering the same question which has multiple answers. The contestant in control decides who goes first. They go back and forth until all correct answers are given or until one contestant gives the wrong answer.

In the “Top 10 Challenge”, a statistical question is asked and there are 10 top answers. The player tries to give five correct answers in 15 seconds.

In the “Triple Threat”, a contestant is asked a question with three answers. If he/she comes up with all three in 10 seconds, the contestant wins $3,000.

Series Finale:
Episode #16
It’s the fifth and final night, and the pressure is starting to mount. The current reigning genius hopes to continue his unprecedented run to 500 questions in the face of a challenger who is actively ready to take his place.
First aired: June 1, 2016.

What do you think? Do you like the 500 Questions TV show? Do you think it should have been cancelled or renewed for a third season?

I missed the series, but haven’t seen any explanation of the claim that all the contestants have to be “certified geniuses”. Did they explain how they were “certified”?

I watched the first four nights, and finally decided the show is a bore. I don’t really mind the host, but
the contestants are obnoxious and unlikeable, especially the current one. Had to turn it off.

I think the TV show 500 questions should be renewed

Loved it, watched it every evening, wish it came on every day, loved Richard Quest, amazed how smart the contestants are (of course they are geniuses), I love game shows, hope it is picked up, I will definitely watch.

This show is incredibly boring, more so than even the equally over-hyped and fake Who Wants to be a Millionaire. “Well, I remember as a child someone read that story, and I recall I had a pink bonnet on and we had chicken a la king for dinner, and my Aunt Gertrude laughed at me because I thought Paris and London were both near New York. And that’s why I always recall the answer to the question is A Tale of Two Cities.” Yup. Even more boring than than. And the host is absolutely unlikeable. Who the hell chose him.

Love “Who wants to be a millionaire”, sorry

My opinion exactly! Loved how you wrote it – very funny!

How many segments are taped in one day. Contestants and host wear the same clothes day after day.

Needs some tweaking and definitely new host. Otherwise something different.

Why do American television networks have to search in the UK for annoying and arrogant hosts of quiz shows? This host rises to the top of annoying and as a result one hour was more than enough.

Very boring! The set is dark and dreary, the host is not handsome and the whole show moves too fast. I watched the first night, hoping things would get better, but they didn’t .
I’ll be surprised if it finishes it’s first run.

Host is annoyingly insufferable.
Set is drab.
Questions difficult to read.
Did I mention that the host is irritatingly condescending?

I can’t see any of the self appointed geniuses (including the host) competing on “Jeopardy.”

Funny, because at least two (one seem only in promos so far) have been Jeopardy champions….

My first comment was a knee jerk reaction. Upon further viewing I actually liked it. I’ll be watching it. 🙂

I only watched until the FOURTH “genius” was another man. Maybe later in the series they will bring out the women geniuses? But really, why couldn’t it have been every other contestant a woman, to represent the population. Sad!!! And I expected more from ABC.

They did have a woman and she didn’t make it to the hot seat..

We watched the show and were so excited but ended up disappointed. We did NOT like the host and his demeanor. It would have been nice if you made the questions large enough to read. Everything is done way too fast. Sorry.

I enjoyed the program for about 20 minutes. After that amount of time, I found Richard Quest’s attitude and mannerisms progressively annoying. He badgers the standby contestant for failing to select a category with a question that will stump the main contestant when, quite obviously, it would be a matter of luck, not skill. By the time the program ended, I decided that I will not bother to watch the program ever again.