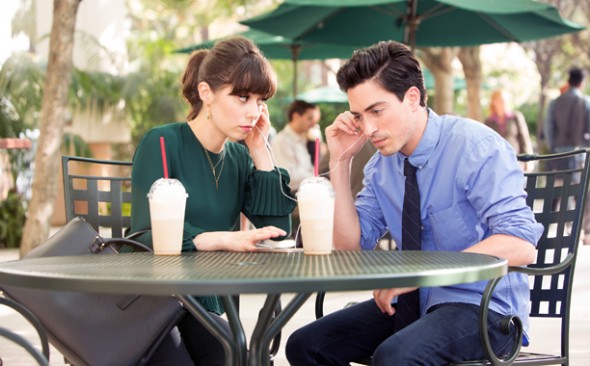 There are 26 letters in the alphabet but NBC’s A to Z TV show only lasted five episodes before being cancelled. The peacock network has decided not to order any more installments beyond their initial 13 episode order.

A to Z follows the story of Andrew (Ben Feldman) and Zelda (Cristin Milioti) — two young people who are very different. Their relationship shouldn’t work and yet it does. Is it true love forever or just a detour in destiny? The rest of the cast includes Christina Kirk, Henry Zebrowski, Hong Chau, Lenora Crichlow, and Katey Sagal.

Debuting on October 2nd, the series got off to a poor start with a 1.2 rating in the 18-49 demographic with 4.79 million viewers. Viewership fell 24% in week two and the ratings kept falling every week after that. This week’s installment, opposite CBS’ returning sitcoms, hit a new low with a 0.7 in the demo and 2.49 million viewers.

Based on the numbers, it’s no surprise that NBC is cancelling A to Z. It is a bit surprising however that the show is staying in production. Eleven episodes have been shot and two more will be produced. Hopefully, the sitcom’s writer will be able to adjust the remaining scripts to bring a fitting conclusion to Andrew and Zelda’s story.

For now, NBC plans to air the eight remaining episodes. The Blacklist will take over the Thursdays at 9pm timeslot on February 5th.

What do you think? Do you like the A to Z TV show? Do you think that NBC should have cancelled it? Would you have watched a second season?

they should at list ended cause if not people are gonna make some bad comments….

I love this show and the Alphabet has more than 13 letters! They should have finished it in respect to the viewers who actually watched the show. I’m a romantic to the bone and this world needs more of this. Too many TV shows portray nothing but people without any kind of love for others but themselves, one night stands and relationships based on nothing it sex and vanity. A to Z really brings back a real love storie to television! My marriage love story was very similar, I’ve been married for 18 years with the man I met in… Read more »

I just watched one random episode of A to Z on a plane couple weeks ago, and I’ve already felt in love with it. Once I got back home and finally had the time, I decided to start watching it from the beginning. It is really sad to discovered that the show has been cancel in the middle of it, I liked it a lot, and I really hope to see how the story goes with Andrew and Zelda. 🙁

I along with all the people below loved this show too. I was devastated when I looked it up and saw that that it was cancelled after the initial 13 episodes. If you listened to the narration at the start, Andrew and Zelda’s time together kept decreasing. I was so sad that it didn’t come to a final ending.

Like others in this chain, I don’t get to watch TV when it airs. Although I’m quite late to the game, I just discovered this show. I’m 5 episodes in and already sad to know that the alphabet doesn’t get completed. I love the idea of A-Z storytelling, as well as the characters, with the narration. This does have a bit of an HIMYM feel to it (especially with the actual M!), which just makes me like it more.

Loved this show, start to finish. It’s a crying shame they canceled it. Not enough blood and guts or drama to satisfy America’s thirst for trash, I guess. This show is clever, funny in a non-slapstick way, sweet, and intelligent. Too bad that doesn’t equal ratings. It certainly should.

Obviously this show needed a running start with all the people commenting about it on 2016.. dont do us like this nbc!! Thats not american

Really really should continue this show!!! It’s so amazing and I want to seeing what happens with them

Should continue this show please. I really love it!!! See everyone commented down below love this show so much!!!! At least please let the alphabet ends to the Z. Because you already started it with A. And the alphabet is not complete when you stop it at M.

Plssss release the season 2 the show is almost 100% like me and my girlfriend,and we both love it so pls carry on

It was great,i loved it,i recommended it to all my friends and it’s really a buzkill to see it being cancelled.

I loved it!! So sad to see it being cancelled and I’m dying to see what happens with Andrew and Zelda! I’ve recommended it to so many people as well!

It was very nice, undoubtedly. I really need to watch the remaining episodes to see how the story ends. I am deadly curious to know about Zelda and Andrew. Please release the 2nd season.

It’s pretty sad that the show could not finish. I would love to see the second season. But like a few other people i would have to agree. I have a TV but i do not have the time to watch it when it shows. So i use OnDemand to watch the shows. I really hope they are able to create a second season. It was a fantastic series. They should give it another try to be honest.

I’m super sad this TV show got cancelled. It was very funny and loved how they managed to developed the different stories. Totally not OK with it being shot off. I think they should give it another try and release the 2nd season.