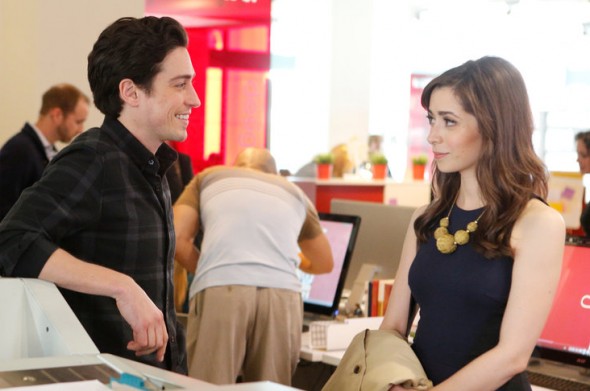 NBC has been having a hard time finding new hit comedies for their Thursday night schedule. Last season’s were all cancelled. Will A to Z be a success and be renewed for a second season or will be canned as well? Is it worth watching?

A to Z follows the story of Andrew (Ben Feldman) and Zelda (Cristin Milioti) — two young people who are very different. Their relationship shouldn’t work and yet it does. Is it true love forever or just a detour in destiny? The rest of the cast includes Christina Kirk, Henry Zebrowski, Hong Chau, Lenora Crichlow, with Katey Sagal as narrator.

The sitcom premiered on October 2nd to an underwhelming 1.2 rating in the 18-49 demographic with 4.79 million total viewers. In week two, the ratings fell to a 1.0 in the demo and 3.63 million, a decline of 24% in viewership.

Unless the numbers start going up, it seems very likely that A to Z will end up being cancelled after one season. NBC is struggling on Thursdays but this doesn’t seem to be an answer to their problems.

But, what do you think? Do you like the A to Z sitcom? Cancel or keep it?

Just found this cute little love story. I work with patients all day so it’s nice to come home and unwind to this romantic comedy. So sad to see it go. Just when it is getting good.

Love it, keep it. Need to see how it ends. Finishing on ‘M’, is like false advertising. There must be a season 2.

Love it keep it give it a chance . A to Z was fun 2 watch wanna c what develops

I think their should be a season 2 on A to Z. I loved this show! It is not like any ‘love story’, and it’s both entertaining & very romatic. It’s also unlike any other TV shows that show the same “love story” over and over again. While A to Z is a unique love story & show that will never be compared to any other.

Love it, keep it

Keep the show. Can’t wait to see what happens. Marriage, I hope. We need more shows like that.

keep the show! I need to know what is going to happen next!

Keep it. We have to know the end.

The show gets better and better each week. Especially the chemistry between Stu and Stephie. Please don’t cancel such an entertaining show!

This show is one of the few new shows for this season that is good. I hope that NBC doesn’t cancel it. I love Ben Feldman and Cristin Milioti together.

This show should definitely not be cancelled! It is one of the few new comedies that is actually good. Not to mention Cristin Milioti is a star.