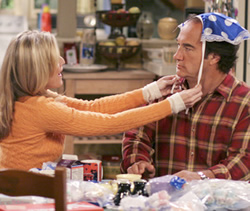 Last night, ABC’s venerable sitcom, According to Jim, signed off after eight seasons and 182 episodes. The show has been performing poorly in the ratings for quite awhile but ABC just kept on bringing it back.

The reason? Well, sitcoms perform well in syndication. So, even though Jim wasn’t doing well in primetime, ABC Studios more than recoups the expenses when the episodes are rerun on cable and local stations. Similar economics have saved Scrubs.

All things must come to an end though and season eight is the end for Jim. Though ABC maintained that the sitcom could return for season nine, co-star Larry Joe Campbell revealed in December that the show’s sets had already been destroyed. Last month, the network conceded that Jim was indeed finished.

In the series finale, titled “Heaven Opposed to Hell,” Dana (Kimberly Williams-Paisley) and Ryan (Mitch Rouse) return from California for a visit and announce that they’re expecting. Andy (Campbell) and Mandy (Jackie Debatin) also announce that they’re engaged. Jim couldn’t care less and then, while everyone else is congratulating the happy couples, he chokes on a shrimp puff. Everything goes white.

Jim then finds himself walking along in the clouds. He runs into Danny Michalski (Dan Aykroyd) on a motorcycle who tells Jim that they’re both dead. Jim almost gets into heaven but is stopped at the last minutes. He must first go on trial to prove that he’s worthy. God is played by Lee Majors while Satan is portrayed by Erik Estrada.

With Andy as his defense attorney and Dana as the prosecuting lawyer, Jim goes on trial. Through clips, we’re reminded about Jim’s character. His children (Taylor Atelian, Billi Bruno, and Conner Rayburn) testify for him, as does his wife Cheryl (Courtney Thorne-Smith). Unfortunately, it’s not enough. Just when it looks like all is lost, his family and friend tell God that, if he’s sent to Hell, they love Jim enough to go with him. The almighty has no choice but send him back to Earth.

But Jim reasons that it’s his personality that saved him so he should never change a thing. After all, “God don’t want me. The Devil don’t want me. The way I figure it, if I never change, I’ll live forever.” He tosses another shrimp puff in the air and, just as he’s about to catch it in his mouth, the screen goes black. End of series.

Some feel that the sitcom had long overstayed its welcome. Some devoted fans are sorry to see it go. What do you think? Either way, was this a fitting series finale?

My wife and I just recently became fans of “According to Jim” after catching an episode quite by accident. We record every episode now and have tons to watch. But we will miss the show and the cast, who did a great jop. Andy and Dana had spot on comedic timing, they were great. Jim and Courtney were perfect in there roles and the kids were great also. It was a very very funny show that we will miss.

Daily Helping » Adrianne Curry has us all a twitter…

[…] show has been on for 13 seasons,  which is slightly more incomprehensible than the 8 year run  of “According to Jim”, staring James […]

GOD, this sitcom was so great.
Cant believe why they stopped it.
Its a shame!

ABC will wish they had something to fall back on. Successful sitcoms are hard to come by. Very few are actually making it.

I’ve only recently got into this show from seeing the reruns late at night. I fell in love with it! I absolutely love the relationship that Jim and Cheryl have. Their characters are great. This show had great humor and was very original. There has never been another sitcom like it. I’m just glad that since I’ve only recently got into it, theres tons of episodes I haven’t seen yet. I need to catch up!

I enjoyed the show alot, damn sure gonna keep watching it in syndication.

BTW for whoever doing the writing Courtney Thorne-Smith charater was named Cheryl.

I definitely will miss Courtney Thorne Smith and her tight sweaters! Just two reasons to watch the reruns.

@ lilkunta. I forgot the fact that the price to produce the show has been low enough to keep renewing it and ABC not haveing a problme with the low ratings. If it costed like a million dollars to produce those episodes and it was geting close to 4 million viewers, they would have pulled it sooner, if that was the case. But it was cheap to produce so ABC was happy with it.

@ lilkunta! According To Jim stayed on the air for so long so it could have a big syndication package so it could stay there for a few years. ABC was probaly not impressed with the ratings, but the fact that earch week had around the same ratings probaly keep them happy. Wich is why they probaly paired it up net to where Idol was.

@ jeff : WRONG. A2J was on y? It got bad ratings & no 1 talked about it around the watercooler.

According to Jim was one of the best shows that ABC ever had. I wish it could have continued. Thank you to the cast for a great show.

Eh, I watched it via Tivo but when they started having Andy and Jim start hugging and having all those gay lines it jumped the shark.
It just wasn’t funny anymore.

I’m sad to see it go. It had a good ending IMO.