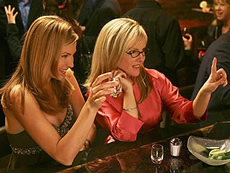 ABC unveiled their new schedule for the 2008 – 2009 season today. There are very few changes to the existing line-up and, as of now, are planning on taking on very few new TV series.

Returning midseason (January or so) are The Bachelor, Jimmy Kimmel Live, and Lost. As expected, Scrubs makes the jump to ABC for its eighth and final season. If CBS drops The New Adventures of Old Christine (looking unlikely), ABC may pick that up as well. According to Jim and ABC News’ Primetime: What Would You Do? will return as well but don’t currently have spots on the schedule.

Okay, on to the casualties. There are no big surprises in the list of shows that won’t be back next season but that doesn’t mean their fans will miss them any less. Shows not returning for another season include:

Big Shots — The drama was weak in the ratings from the start but ABC tried to keep it going. Production was interrupted by the writers strike and only 11 episodes were produced. The last one aired on January 24th.

Carpoolers — This offbeat sitcom was paired with Cavemen and was likely hurt by the lead-in. All 13 episodes have aired and the series finale was seen on March 4th.

Cashmere Mafia — This series competed indirectly with NBC’s Lipstick Jungle and lost. All seven episodes have seen the light of day and the series finale aired on February 20th.

Cavemen — Based on a concept from car insurance commercials, this sitcom became the butt of many jokes this season. A full season of 13 episodes were produced but only seven aired. You won’t see the rest on ABC.

Just for Laughs — A hidden camera and practical joke reality show. The series ran for two seasons and 32 episodes. The last one aired on April 8th.

Men in Trees — ABC bounced this one all over the schedule and put it on hiatus a couple times. Even devout followers had a hard time finding it. The network is currently airing Trees’ season of 19 episodes and the last episode is scheduled for June 11th.

Miss Guided — The offbeat sitcom sank in the ratings. Seven episodes were produced and all have aired. The series finale was broadcast on April 3rd.

Notes from the Underbelly — ABC gave the series a second season but its numbers didn’t earn it a third. Of the 22 episodes that have reportedly been produced, only 14 have aired. There are currently no plans for the remaining eight.

October Road — The show’s ratings weren’t great last season but ABC took a chance and renewed it. The ratings got worse for the second season. All 13 season two episodes have aired and the series finale was shown on March 10th.

Oprah’s Big Give — Though the series had decent ratings, the show won’t be back because Oprah Winfrey doesn’t want to do it. All eight episodes have aired with the finale running on April 20th.

Women’s Murder Club — Though the drama’s ratings weren’t bad, the demographic skewed older. All 13 episodes have already aired, with the exception of tonight’s series finale.

Here Come the Newlyweds and Dance War: Bruno VS Carrie Ann may return at some point next season. Initial casting a second season of Newlyweds has begun but the show hasn’t gotten a greenlight.

The network also hasn’t made its mind about several possible new shows for midseason, including the new version of Cupid which is still being developed. Stay tuned!

i think they need to bring back gary unmarried and the worst week back
we all could use some laughter in our lives after a hards day work.

I agree with Janice. I think she says it very clearly, I truly miss watching that show.

“Though the series had decent ratings, the show won