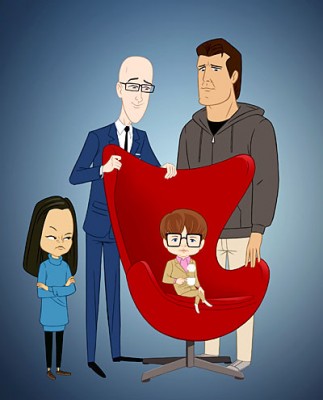 FOX has released their new schedule for mid-season and Allen Gregory wasn’t on it. What does this mean? Has the animated series been cancelled?

Following a slew of negative reviews, the series debuted on October 30th. It attracted a 2.4 in the 18-49 demographic with 4.77 million total viewers putting it in last place for its timeslot. The series tied with The Cleveland Show as FOX’s lowest-rated show of the night and was even out-performed by a repeat of The Simpsons. This certainly wasn’t an auspicious beginning. A year earlier in the same timeslot, an episode of The Cleveland Show performed 30% better.

Allen Gregory fell by nearly 13% in week two and still hasn’t stopped falling. This week’s installment fell an amazing 21% in the demo, hitting a new series low of a 1.5 in the demo and 3.18 million viewers. It currently ranks 12th out of 13 scripted shows on the network, beating only Fringe which airs on Friday nights. It has “D+” demo grade on the network report card and, the way things are going, it won’t take long for that grade to drop even lower.

FOX ordered just seven installments of Allen Gregory and, the way things have gone, they’re very likely glad they didn’t ask for any more. There are two episodes left to air and they’ll be finished airing by December 11th. The network could run repeats after that but may decide to run something else. New episodes of Allen Gregory have done so poorly that its hard to imagine that reruns wouldn’t do even worse.

FOX hasn’t officially cancelled Allen Gregory and has no reason to announce it if they did, at least until the show’s off the schedule. If they did, the ratings would only go down.

They’ve made no mention of putting new episodes into production — even though they ordered additional scripts way back in July. Animated shows need a longer lead time for production so FOX has often handed out very early renewals. Not so in this case.

In the end, it makes no sense for FOX to renew the Allen Gregory show for a second season. It’s performed very poorly and the network has plenty of better-performing animated fare.

But, what do you think? Do you like the series? Do you think it should it be cancelled or renewed for a second season?

Well, it’s probably certain to get cancelled after tonight.

I’ve watched at least half of the episodes of Allen Gregory so far and I can’t say that I’d be disappointed if it was cancelled. Most of the storylines aren’t funny and the subplot of the kid being obsessed with the principal is just creepy. Good riddance.

I think the show is hilarious.

It was my understanding that Allen Gregory was supposed to air until Bob’s Burgers (which was renewed) went back into the lineup? I have enjoyed the show personally, I watch with my kids every single week. We don’t get to count in the Nielsons because we have not been selected to fill in a little book about what we are watching, but my 4 tvs in my house are on nearly 24 hours a day, and we never miss shows like this one. It takes an educated person to appreciate some of the humor, but otherwise I think it could… Read more »

Bob’s Burgers is like a warm reminder of “Home Movies” to me so I want it to stay. But I can’t say that I will miss “Allen Gregory”.

Actually Fox’s original lineup for this season only had Allen Gregory on until midseason in the first place. The plan had always been to move Napoleon Dynamite in its place. Just because it’s not on the schedule doesn’t mean it has been cancelled. Here’s an article from May that confirms this: http://www.stltoday.com/entertainment/television/gail-pennington/article_5001bddc-7fda-11e0-bc04-0019bb30f31a.html

allen gregory should of been gone after the second show it was terrible.i liked Bobs burgers it was funny

how has it gone on this long? what an atrocious series.

Allen Gregory was horrible. Fox should just cut their losses.

What are you talking about ross?
Bobs burgers is hilarious and napolean dynamite hasnt even aired yet?
I actualy kinda like allen gregory but im not sad that its cancelled

I thought it was awful and even a bit painful to watch.

It will be so nice to have this cancelled off, and then bring back something funny like Bob’s Burgers.

Yeah, it’s going to get cancelled, and so will Bob’s Burgers and Napoleon Dynamite.

It was like a poor imitation of a bad Adult Swim show. I watched the first episode and felt like Hans Moleman saying, “You took 30 minuets of my life and I want them back!”

I could care less what Fox does. Bob’s Burgers was much better.

Wow! That’s like comparing getting kicked in the teeth or getting punched in the nuts. Neither option is good.