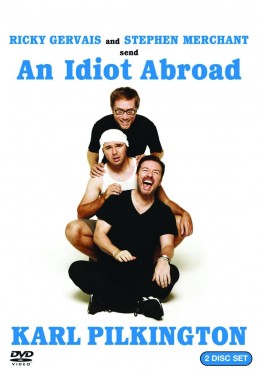 In this UK comedy series, Ricky Gervais and Stephen Merchant (co-creators of The Office and Extras) send their friend Karl Pilkington (The Ricky Gervais Show) around the world — against his will.

Karl thinks he’s visiting the Seven Wonders of the Ancient World, but along the way the “Little Englander” must endure camel rides, jungle treks, tribal customs and local oddballs while dining on toads and searching for a clean bathroom.

The first season of this unique series, An Idiot Abroad, has just been released on DVD. The two-disc set includes all eight episodes in their original, uncut format (which translates into some rough language and male nudity). Extras include a 23-minute preview show, which outlines Karl’s travels, and a lengthy review in which Karl shows exactly how much he’s learned from his journey (not much). Eight deleted scenes and a gallery of stills round out the package.

You can purchase An Idiot Abroad

Guidelines: This giveaway is open to participants with a United States mailing address only. (International readers can enter if they have a friend in the States who can accept their prizes by mail.) Many may enter but one person will win. You must be 18 and older to enter and no purchase is necessary. Contest ends January 22, 2012.

UPDATE: Congratulations to Lindsay who won this DVD set in our contest. Thanks to everyone who played and we’ve got more contests coming!

Karl Pilkington is so funny.

looks like a fun one, liked him on the recent awards show too!