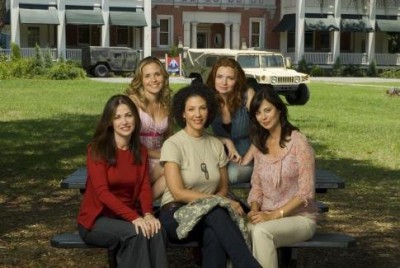 Lifetime has announced that season six of their popular Army Wives series will debut on Sunday, March 4th. It’s been speculated that this will be the final season of the TV show but the cable channel hasn’t officially announced this — but there’s plenty of time. Given its size, it seems likely that Lifetime will split season six into two mini-seasons.

Last November, Lifetime made headlines when they ordered 10 additional episodes for season six, bringing the total to 23 installments. This represents the show’s biggest season to date. The cast and crew were still in production on the original episodes so it was a way to keep them in continuous production — and keep costs down.

The original Army Wives actors are only under contract through season six. By essentially ordering a seventh season and tacking it onto season six, the cable channel didn’t have to renegotiate contracts or worry about losing any performers to more lucrative offers. For the actors, the move meant that they’d miss the opportunity to audition for the networks’ pilot season.

Here’s the press release regarding the March 4th return:

Army Wives follows the struggles, dreams and friendships of a diverse group of women – and one man – living with their spouses and families on an active army post. The series stars Kim Delaney, Sally Pressman, Brigid Brannagh, Brian McNamara, Sterling K. Brown, Wendy Davis, Drew Fuller, Terry Serpico and Catherine Bell. Television icon Susan Lucci (All My Children) is set to make several special guest star appearances this season as Audrey, the wife of a retired Brigadier General, reuniting her with her former All My Children co-star Delaney.

The sixth season of Army Wives will see significant changes to the tribe. As they prepare to leave the recently decommissioned Fort Marshall and go their separate ways, one of them will be bidding a final farewell. In the season premiere, Roxy (Pressman) is having a hard time adjusting to the idea of moving away from her close knit group of friends, especially Pamela (Brannagh), while Michael (McNamara) and Claudia Joy (Delaney) face a tough decision about their future. Despite the turmoil, Denise (Bell) and Frank (Serpico) are planning a party for Molly’s first birthday, which may be the last time the group gathers to celebrate a milestone. But when Joan (Davis) gets word of a potentially deadly event that will descend on Fort Marshall, the tribe must band together yet again and prepare for their lives to change in an instant.

Season five of Army Wives was 2011’s number one program in its Sunday 9 p.m. time period on basic cable among Women. Additionally, Army Wives grew its audience by 11 percent among Total Viewers and 14 percent among Women 18-49 versus the prior season. Army Wives is produced by ABC Studios for Lifetime. Mark Gordon and Jeff Melvoin serve as executive producers. The series is based on the book Army Wives: The Unwritten Code of Military Marriage by Tanya Biank, who serves as a consultant.

Coming Home follows the unforgettable and inspiring surprise reunions of members of all five branches of the military with their spouses, children, parents and other loved ones as they return home from active duty throughout the world. Hosted by former American Idol finalist Matt Rogers, each episode highlights multiple reunions featuring service members and their emotional stories.

Upcoming episodes of Coming Home feature more dramatic and emotional surprise reunions and a number of special guest appearances including Grammy(R) Award-winning country music star Clint Black, who helps two adorable kids write a song about their Army captain father who just returned from Afghanistan and is hiding in the next room. Sesame Street’s very own Elmo and Rosita travel all the way to Fort Bliss, Texas, to put together a once-in-a-lifetime surprise for the children of an Army sergeant who are having an especially hard time with their father’s deployment in Iraq. And the NFL’s Oakland Raiders also join in on one of the season’s biggest moments when they help surprise the children of a lifelong Oakland Raiders fan who hasn’t seen his family in over a year when he suits up in the infamous Silver and Black to make a stunning appearance mid-field during halftime at a game in front of a stadium full of Raider Nation fans.

ABC Studios, part of ABC Entertainment Group, is a leader in the development, production and strategic distribution of entertainment content across television and emerging digital platforms. As a key content driver for the Disney/ABC Television Group, the studio has produced multiple seasons of primetime series, such as “Desperate Housewives,” “Lost,” “Grey’s Anatomy,” “Castle,” “Brothers and Sisters,” “Private Practice,” “Army Wives” and “Criminal Minds,” which have fed the company’s distribution pipelines worldwide with programming and related product lines.

Under the leadership of award-winning producer Tom Forman, RelativityREAL has created and produced dozens of series and pilots for network and cable television. Though it was formed less than 3 years ago, the division has 67 projects in production, including 17 original series that are currently airing or will air in the upcoming television season including “Police Women” for TLC, “Coming Home” for Lifetime, and “The Great Food Truck Race” for Food Network.

What do you think? Do you think season six should be the last? Should it be split into two parts?

I love army wives please dont take it off the air. I was a army wife for ten years finally there is a show I can relate to.

PLEASE, Army Wives MUST continue, the hour goes so fast, it’s the best series ever.
Show all the episodes at one time, don’t keep the fans waiting.
It’s worth whatever the stars want to continue the series.

Please please don’t take off our Army Wives !!! That is the best show by far on tv… I’m not an army wife but my husband and I can’t wait to see it when it’s on, so what ever you do please keep it on… we live for Sunday night just to watch it and hate when season ends. we could watch it nightly if you had it on…. as I bet all the fans of the show would..So please don’t think about it.

I would like to see the season in a whole and not split up. I also think that as a fan of this show that the show should continue. To us fans when we watch a show every week like this we come to know and love the cast. This is a number 1 show and it should continue.I would like to knw why lifetime feels the need to end such a great show it seems to be a pattern for lifetime. They did the samething with Strong Medicine 6 yrs and that was it. I love Army Wives and… Read more »

Stephanie and I want to get engaged before I leave for a long period of military training and we have entered into a contest through their local radio station. The contests get voted on who is the cutest couple and the winner will have a chance to win an engagement ring, something that would help out a to get my girlfriend that special something of her dreams. If you would like to support Stephanie and I and help us just click on our facebook picture in the link below and “like” it! Thank You so much! http://www.facebook.com/photo.php?fbid=10150513739196371&set=a.10150513717711371.365671.59191226370&type=1&theater

I think that this show is important for all of us to see and appreciate what our Military Families do not just the soldier but the whole family. I know as an American I understand better after watching this show. The cast is wonderful and I look forward to it any way I can get it. I’d prefer not split and please don’t make this the last season.

And isn’t that the soul purpose of Lifetime Shows? To make moments that last people a lifetime? Do not cancel!!! Our war with Irag lasted longer.. It’s time America heals from it… Through Army Wives, America can heal and recover with your story to a strong ending.

Army Wives has banned people across America together although somewhat fictitious, brings an understanding and respect to the sacrifices of armed forces families. It not only shows how growing together helps those apart from their own, it shows how friends can strengthen diverse and traumatic circumstances while raising levels of endurance through trying times.

There’s no show like it… And it has brought people all over the world together across the miles for an hour a week sharing moments that last a lifetime.

I would love to see this season all in one part and not all split up. I seems like a long enough time between seasons without making the public wait any longer.

Please do not take this off!!! This is a wonderful show and absolutely love watching them!!!! I hate to miss any episode.. Keep the season 6 together and do not split it up!! Keep keep this show as it is an excellent show!!!!!

Please don’t take that show off I just wait for it to come on and sometimes it seems like a long wait. that has some great actors on it, wonderful show. I don’t have nobody in the army so that opens a world of what other families go through so please don’t shut my eyes and I really love that and so do alot of my fiends and family

I LOVE ARMY WIVES! Please dont take it off the air! Its the best thing on Lifetime! Please… Please… The actors are amazing!

I started watching this show when my husband left to go to cuba for a year. I love this show. Then after a year long tour in cuba I was blessed to have him home for 6 months before he deployed for a another year long tour over seas. That was 2009 -2010 and now we are at a new base and he has been home for a year and he is leaving again for another year. I watch this show because it makes me feel close to him while he is gone. Please I ask that you not take… Read more »

No, love love love Army wives. Living so near Ft. Bragg I have a seen a little peep into what the Army families go through. I love the show!!!