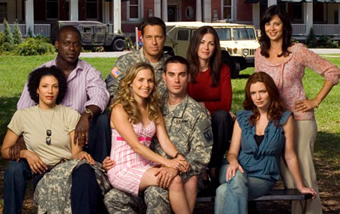 TV show description:
This series is set at the Army Post of Fort Marshall, in Charleston, South Carolina. The lives and dramas of Roxy LeBlanc (Sally Pressman), Claudia Joy Holden (Kim Delaney), Denise Sherwood (Catherine Bell), Roland Burton (Sterling K. Brown) and Pamela Moran (Brigid Brannagh) all intertwine as they deal with being a spouse of a member serving in the Army.

Claudia is the wife to Col. Michael Holden (Brian McNamara) and has just arrived at Fort Marshall, a place where soldiers are either about to be shipped off to Iraq or are returning home from there.

She meets and befriends Denise, who has grown up on military bases her entire life. Denise was swept away by Major Frank Sherwood (Terry Serpico), but their recent relationship has become anything but easy.

In contrast, ex-cocktail waitress Roxy’s relationship to PFC Trevor LeBlanc (Drew Fuller) has come both easily and quickly as the two marry after knowing each other for only five days.

“Army husband” Roland is struggling both as a husband and a psychiatrist in trying to help his wife, Joan (Wendy Davis), cope with post-traumatic stress disorder after her tour of duty in Afghanistan.

And as any military family knows, sacrifice is often required, like in the home of former Boston police officer Pamela Moran (Brigid Branagh). She’s becoming a surrogate mother to enable both her and Delta Force husband Chase Moran (Jeremy Davidson) to claim extra benefits.

Based on the memoir Under the Sabres: The Unwritten Code of Army Wives by Tanya Biank, this drama details the battles occurring on the home front. For these women and men, being all you can be, sometimes costs everything.

Series Finale:
Episode #117 — All or Nothing
When Tim goes missing after hurting her while having a nightmare, Holly reaches out to the tribe and Tim’s platoon for help. They search for him while trying to keep is absense quiet. Hector tells Tim that he will always be there for him and Tim agrees to get help for Post-traumatic Stress Disorder (PTSD). Denise catches Michael in a compromising position with Kat. Latasha and Quincy receive news about his military career. Roland and Joan prepare to leave Fort Marshall, and a retirement ceremony is held for Joan. Gloria continues to be pulled between Hector and Patrick but then comes to a decision.
First aired: June 9, 2013.

What do you think? Do you like the Army Wives TV series? Do you think it should have been cancelled or renewed for an eighth season?

i would of watched a season eight if the original characters/actors Trevor, Chase, Pamela and Roxy had remained. but i feel like season seven failed because of Claudia Joy being killed off.

I loved this show. I couldn’t wait for the next time it was on. Please won’t you bring it back. It was such a great clean family show.

I think Army Wife should never been canceled. This show the American people how the Army family lives and there love one always in arm way. It a lot different then civilian life.

I agree with others I did enjoy this show much and wish they would put another one on maybe, with combination of all military”s (branches) wife’s with family.. I was a military (Navy) child.. I missed that type of life as child been all over country..enjoying go on every ship my grandpa was commission on..wish I would of went in my grandpa steps..

Ex military U.S. Air Force lived some of the stories seen, was able to relate to the pros and cons of military life. Loved it wish season 8 would have been made left a lot of twists from finally of season 7. Bring it back

I think there should be a season eight like new beginnings for capt galassini and charlie; gloria and hector last ep is kinda left hanging and new love for general holden. there’s a lot of twist from the last season and last ep. Paging Katherine Fugate

I enjoyed army wives so much I watched again recently. I loved it. I laughed and cried shared the emotions please please add on to the series. It’s the best tv series and I’m not much of a tv buff but I was glued to this series please bring back more of army wives

Out of the few decent programs, Army Wives was number one. I would trade all the reality shows for the return of the series.

I really like the show and was looking forward to another season.

I really miss watching Army Wife’s I just went on Netflix and watched all the episodes. I wished you would bring it back I was so disappointed when it ended I thought it helped with people who deal with there sponsor or family members being deployed. It gave us all something to look forward too like someone understood. Please bring this show back.

I truly believe that if you picked some great actor’s as y’all did in all the last seasons, you could keep it going. Had never watched this until a friend had all 7 seasons recorded. I’ve spent many notes up til 3&4 in the morning, because I couldn’t wait to see the next episode. Please make more.

I watched on Netflix and I think a season 8 would be great . I don’t watch a lot of TV drama but I watched this every chance I had until I saw it all . MORE PLEASE !