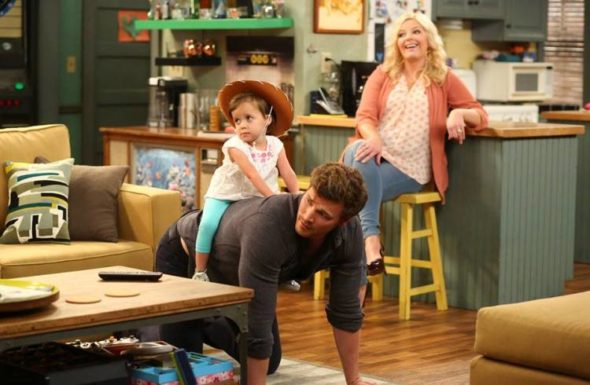 Are you a fan of Baby Daddy? As previously reported, Freeform has cancelled the TV series after six seasons. The series finale airs tonight, May 22nd, at 8:30 p.m. ET/TP. Even though the sitcom is ending, we want to know if you’d watch more.

The comedy follows Ben Wheeler (Jean-Luc Bilodeau), a young man who finds out he has a daughter and decides to raise her with the help of his brother and best friend. The cast also includes Melissa Peterman, Derek Theler, Tahj Mowry, and Chelsea Kane.

Nevertheless, the sitcom seems to have a passionate (if somewhat small) fan base. What do you think? Would you watch season seven of Baby Daddy?

I like the fact that it’s lighthearted and an altogether clean-comedy show!

Its a great show a show you can all watch together its like a comedy of old when they were good to watch please bring it back. Thank you

This is a great show, with a great cast. My husband who doesn’t watch much tv other than sports or news, loves watching this show. Looking forward to more of this show

It funny! I love this show. I don’t watch a lot of TV because a lot of the shows don’t appeal to me but Baby Daddy was one show I looked forward to watching.
I don’t even answer my phone when Baby Daddy is on. This is so sad. I would watch it again and again.

Yes! Please come back for another season! I’ve been binge watching this on Netflix and while they don’t have season 6 on there yet, I’m sad to find that the show ends there. I would totally watch if they come back for season 7, I love this show!!

I like the show baby daddy it is funny always makes me laugh never missed a show, i would be disappointed if it didn’t come back. I looked forward to watching it every week. I said before it should have been an hour long show it went by so fast with only 30 minutes

Um yes what’s An insult is what they’re replacing the show with. It’s gonna be worth wild not some spin off my shoulders apparently only based upon certain factors of the people who watch it.

I WOULD DEFINATLY WATCH MORE

Yes it is so funny and hilarious!!! Not many shows like this that make you laugh. To many crime drama shows. But yet they won’t to cancel the funny shows and leave those kinds running for 10 or more seasons. But baby daddy last man standing 6 seasons only even with high ratings and they get cancelled.

I would like to see more of that show. If it does not put back on or renew then I will not step down.

Yes!!! I LOVE this show! Being “older”, I remember the really great TV programs of the past 50 years and this is one of the really good ones! It is extremely upsetting to be losing it….Melissa Peterman is awesome & I’ve been a fan ever since Reba. I’ll be saying a prayer that somehow, someone will save this show….Thank you to the entire cast & crew for such great work! God bless you all!

Yes. It’s very entertaining. I especially love watching Melissa Peterman and Chelsea Kane. Please have someone write a sitcom for them. They are marvelous!