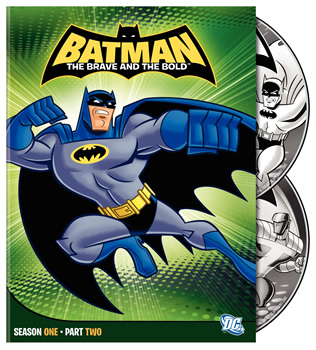 Based in part on the classic “team-up” comic book series, Batman: The Brave and the Bold features the caped crusader partnering with lesser-known heroes from the DC Comics universe. The series has introduced many classic superheroes to a new generation of viewers. In some cases, this is the first time these characters have ever been animated. Batman faces any peril -– including other heroes stealing the show -– in his relentless pursuit of justice.

Warner Bros. has released a new collection of 13 episodes from the second half of season one. The two-disc collection features the Dark Knight working with heroes like Aquaman, Plastic Man, Blue Beetle, Red Tornado, Green Arrow, Wildcat, Deadman, Bronze Tiger and Atom. They take on an array of evildoers ranging from mad scientists to intergalactic crooks, from power-mad dictators to out-of-control teenagers.

You can purchase Batman: The Brave and the Bold – Season One, Part Two

UPDATE: Congratulations to Jose “Joey” Ayala II who won this DVD set in our contest. Thanks to everyone who played. We’ve got more contests coming!

Well it’s the last day for the giveaway, I hope I posted enough, I would love to have this!

I love this show, Batman is one of my favorite superheroes!

Hope I win. Can’t wait to watch the DVD’s

Batman is great. Hope I win!!

i never loved Batman until just a couple years ago, but now i cant get enough!! i want that sooooo baad!