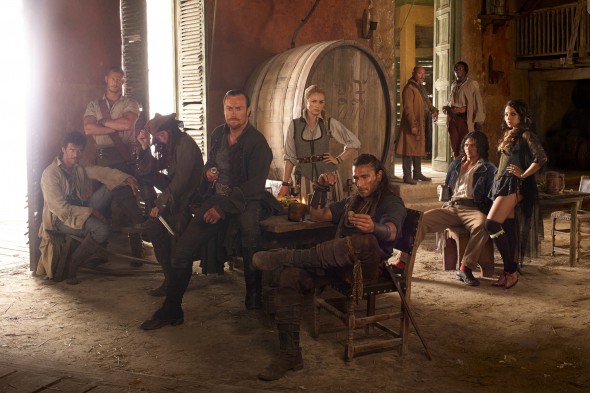 TV show description:
This adventure series takes place in 1715 in the Caribbean. Pirates have been declared enemies of all civilization. Ruthless Captain Flint (Toby Stevens) is feared amongst pirates and is facing threats on all sides.

Captain Flint is so obsessed with finding gold-laden galleon, the Urca de Lima, he almost drives his crew to mutiny. On his side, he has the tough talking Eleanor, his quartermaster Mister Gates (Mark Ryan), and boatswain William “Billy Bones” Manderly (Tom Hoppe).

Arrayed against him are various opponents including Richard Guthrie and rival captain, Vane (Zach McGowen), with his right hand, Rockham (Toby Schmitz). Vane and Eleanor have a sexual history but now, she’s with Max (Jessica Parker Kennedy), a savvy prostitute.

Smooth talker John Silver (Luke Arnold) is a new member of Flint’s crew. He’s hiding an important secret and he uses it to undermine his captain’s agenda at every turn.

What do you think? Do you like the Black Sails TV show? Do you think it should be cancelled or renewed for another season?

The show ended over FOUR YEARS AGO!!!
Yet, it STILL says “ongoing” “has not been cancelled”
Why hasn’t tvseriesfinale.com corrected this?

WHAT VERY FEW PEOPLE REALIZE IS THAT THE PIRATE ERA PRODUCED A TRULY DEMOCRATIC SOCIETY. PIRATE CREWS ELCTED THEIR CAPTAINS BY VOTES AND THEY COULD CALL FOR NEW ELECTIONS IF THEY WERE NOT SATIFIED WITH THEIR ELECTED CAPTAIN’S RESULTS. REMEMBER, NOT ALL CAPTAINS WERE AS BAD AS BLACKBEARD. AND THEY DID ASSIST GENERAL JACKSON AT THE BATTLE OF NEW OREALNS.

I could watch this show if it went on forever! I DVD the entire last season and plan on watching it again! Please keep up the great work!

We love this show. It is well acted well filmed. Has parts of history included to make it very real. We wish it could go on for much longer

Great show, one of my favorites don’t cancel it

This is a really good series. Renew please!

I would love to see this show continue. I want to see what happens with Silver and Madi. Is captain Flint really gonna settle down and be gay. This show should continue. I really enjoyed watching it.

IMHO this is the best tv show that was ever produced!!! It as perfect in every single aspect: acting, story & plot, characters, action, twists, etc…. Wow…Will be missed dearly and one can only hope that they will go on an do a treasure island, or another spin-off that covers the adventures of long john silver that cover the time leading to treasure island

The best show on tv.The writing and acting DESERVED awards.The Golden Globes and Emmys are a joke not too recognize this show.Alas,all good things come to an end.