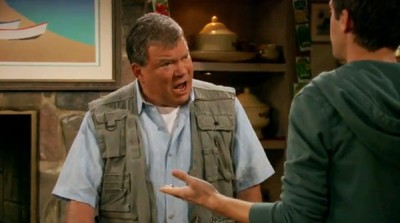 Well, the $#*! may have hit the fan. It’s being reported that William Shatner’s sitcom, $#*! My Dad Says, has been cancelled after one season on CBS.

$#*! My Dad Says revolves around a young struggling writer who’s out of money and must move in with his cranky and opinionated father. The TV show stars William Shatner, Jonathan Sadowski, Will Sasso, Nicole Sullivan, and Stephanie Lemelin.

Despite people’s doubts that a Twitter feed could inspire a sitcom, the TV series got off to a solid start in September with a 4.0 rating and 12.58 million viewers. The next two episodes fell 18% and 12% respectively but the series was still doing well.

The numbers went up and down a bit over the course of the season but the series still ended up averaging a 3.0 rating in the 18-49 demographic and 10.42 million viewers. Since the rest of CBS’ schedule is doing so well, that rating put the series squarely on the bubble. Had it been on NBC, it would have been safe.

The one problem that $#*! My Dad Says had was that it lost a significant amount of the lead-in from The Big Bang Theory. That sitcom averages a 4.0 in the demo so $#*! loses 25% of that prime audience. Despite that, $#*! was reportedly still in contention up until recently, though it was looking like co-star Jonathan Sadowski might have been dropped.

Ultimately, it seems that CBS execs believe that they can do better with another show in the timeslot. Rules of Engagement didn’t perform as well as $#*! but was renewed anyway. The fact that CBS co-owns Rules, which is close to having enough episodes for syndication, likely had a lot to do with that decision.

CBS has cancelled $#*! My Dad Says as well as fellow newbie Mad Love. CBS introduced three new sitcoms this season and only one, Mike & Molly, is expected to survive.

All 18 episodes of $#*! My Dad Says have aired with the series finale having run on February 17th.

We don’t know what Ed Goodson would have to say about this but series co-creator Jonathan Sadowski tweeted, “I regret to inform you that S**T MY DAD SAYS has been cancelled… Thanks for the memories!”

What do you think? Should $#*! My Dad Says have been renewed for season two? Will you miss it?

It is a shame it was canceled. I loved the show… Much better than Mike & Molly or Mad Love. William Shatner was perfect for the part. He really gave the show some character. Bring it back. If they can bring back Rules of Engagement… then why not bring back Bleep My Dad Says. I WILL WATCH.

why do they always take off comedies and add reality. Doesn’t anyone like to laugh anymore

It was a very funny show, it was different but halarious, its a shame it is not coming back on.

Loved the comedy Bleep my Dad says, it was funny and very enjoyable to watch. I was very sorry to see it NOT renewed. As far as I am concerned, it held up as well as any other continued comedy series.

don’t cancel it Bleep my Dad said is clever, funny and entertaining. It is very well done and a bit different than other sitcoms. Halima

Bad decision cancelling bleep my dad says. I really liked the show. Gonna miss it. Why are all the good shows cancelled?

Whose idiotic decision was it to cancel a show with a great ensemble, a wickedly funny humor and an awesome addition to sitcoms worth saving. What is there to do now but regret (and hope that another network is smart enough to pick it up.)

I really liked that show. Can’t believe they kept Rules and got rid of Bleep. Bad idea.

All this time I’ve just been waiting for the 2nd season to begin and to find out what the big ending from the 1st season was all about. -What a shame.

I loved that show! Practically everyone I knew watched it and I don’t see why it was cancelled. I’m a fan of several shows on CBS to include Rules of Engagement and HIMYM. I will truly miss Bleep and seeing Shatner’s cranky face every week. Please bring the show back CBS!

I will really miss “Bleep My Dad Says” my husband and I really liked it.

This is quite possibly one of the poorest decisions cbs has made lately…lol..I, myself won’t be paying much attention to them after this. It was a good show, I too have seen every episode. I am not shocked, but, it surprises me that these people who are supposed to have their fingers on the pulse are basically brain dead.

Nothing but crime shows on tv removing a great comedy you that can give you a good laugh once a week is a pitty.Would be nice if you would reconsider a least one more season.

I would hope that this show could make a transition either to another network or better yet to a cable channel like TV Land where an audience who appreciates how funny and well acted this show can be found. Like “Hot in Cleveland”, this show’s all star cast and special guest appearances reach out to a generation of television viewers like few shows can. That said, I hope we will someday soon know the answer to the burning question “who is standing at the door”?