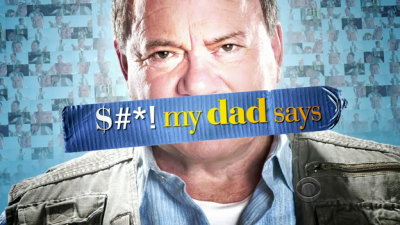 After months of being on the bubble, CBS cancelled $#*! My Dad Says after just one season of 18 episodes. Though the sitcom has better ratings than Rules of Engagement and CSI: Miami, those shows will return but William Shatner and company will not.

Last week, Shatner told his fans that he was holding his breath waiting to hear about the renewal. After the cancellation news broke, Shatner wrote to his Twitter followers, “Thank you to all for the outpouring of love you have shown $#*! My Dad Says. I thank all of you for watching.” Not surprisingly, the 80-year-old actor is already busy with several new projects. He’s currently asking his followers to identify specific scenes for a new Star Trek documentary called The Captains.

Justin Halpern, the creator of the Twitter feed that spawned the TV show wrote on his blog, “It was a bummer until I remembered that I got a TV show based off a Twitter feed and a book and was basically the luckiest asshole who ever roamed this earth.”

According to Halpern, here’s what transpired when he called his no-nonsense father:

“You didn’t know who it was and you answered the phone with ‘Hey. What do you need? I’m busy’?” I asked.

“Lets people know not to f—- around with my time,” he said.

“My show got canceled,” I said.

There was a moment of silence on the other end of the line and I wasn’t sure if he heard me. I was about to say it again, when he spoke.

“Well, I liked it. It was kind of s—tty at first, but I thought it got a lot better. You know what show I like? Cheers. That was a good show,” he said.

“That was a good show,” I said, wondering if that was part of a larger point he was about to make.

“Also I liked The Simpsons. At first I thought, it’s just a stupid cartoon for pants-s—tters, but I was wrong, great show.” (Pants-s—tters is how my dad refers to toddlers.)

“And let’s not forget the big picture here. You don’t have to live with me anymore. One less person crawling up your a— every morning. That’s all anyone can f—-ing ask for.”

What do you think? Are you upset the sitcom won’t be back for season two next fall?

I :love: this! I can’t beleive you pulled this off. This deserves another 100 comments it is so good Sandi

There are a lot of shows with worse ratings that did not get the axe…even on CBS. This one is almost up there with Jericho…nice call Moonves (friggin moron)

Stunning to say the least! You truly made a serious accountablity for a dev watch. You have really swept me away! Super job! Shandi

Will miss the wish another station would pick it up….Shatner was AWESOME

Shatner is better left at the controls of the Enterprise.
His ventures into other frontiers have been less than astronomical.

It is sure hard to find anything on television since all those cancellations Hypothesis: Do You KNOW? How does the “Nielsen ratings system ” work? Anyone out here understand, in each situation, how do the rating system really works? Hypothetically situation, Old King Cobra watches News, Drama,sports ,playboy channels and he DVR “No Ordinary Family” to watch, next day with his children age 2,4, 10 But 20 year old wife watches “No Ordinary Family” a week later, by herself. The Wife also gone during the day time because she was busy, running around, spending King Cobra’s money. So she, DVR’D… Read more »

it does not surprise me the show was cancelled with better ratings than CSI Miami. Violence sells much better than comedy to the American public.
Monkey see….monkey do.

Fortunatley Shatner is way above it all and can move on without a skip, always a pistol..
I have enjoyed his efforts all along. Thanks Captain!

If you honestly think it was pulling in money in advertising and they cancelled it because of the name, I have a bridge here in Brooklyn to sell you. It’s all about the dollar.

If you read the reason it was cancelled it wasn’t due to ratings, it was due to the title of the show. I think that is an awful reason to cancel a show, especially a show which had outstanding ratings.

If people don’t have a problem watching all the crime shows about murder, rape, battery, child molestors, then why would they have a problem with a title? This show took away from all the other crap that is being aired now days.

The show’s ratings were much better than the horrible “Rules of Engagement” and after about episode 10 it really found its stride. This is the one cancellation of any network that I regret, because when I tape Thursday nights on CBS, I have to leave a hole to not waste time between Big Bang and CSI.

I think this post illustrates why the show didn’t live up to the source that inspired it.

Those “jerks” are the American people. Nobody was watching this show. The reason shows get cancelled is simple:

Why pump more money into a show than you take in?

Well, another stupid move for CBS! Why don’t they give a show a chance? It was a funny show, and I liked it. Who are these jerks that think they know what America likes and dislikes? Sometimes people just like to watch a funny show that doesn’t require any deep thinking or the need for a degree in criminology or medicine to understand. Frankly, I’m sick of having to vote to see the outcome of a show, or watch TV with a container in case I get sick from all the HD blood and gore that can be seen on… Read more »

I really liked this show boo on who decided to cancel.. sometimes it just a time slot issue what is up with you programming all the popular shows on the same night and time on every channel. Thank goodness we can at least record our favorites..