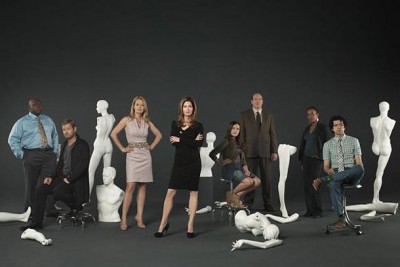 Remember when NBC reworked Harry’s Law in an (unsuccessful) attempt to attract better ratings? (As we know, that didn’t work and the show was cancelled.) Well now, ABC is trying something similar with Body of Proof.

Three actors — John Carroll Lynch, Nicholas Bishop and Sonja Sohn — won’t be back for season three. In their place, ABC is casting two new series regulars whose characters will be working for the Philadelphia Homicide Division.

Detective Tommy Sullivan is a former NYPD detective who, 20 years ago, had a romantic relationship with Megan (Dana Delaney). They broke up after she caught him cheating on her. Charming and cocky, Megan will have to figure out if he can now be trusted.

Meanwhile, Detective Adam Schaeffer is a young newbie detective who’s smart and a Phillie native. He’s overconfident and drives his new partner, Sullivan, crazy. He joined the force to rebel against his father, a high-powered defense attorney.

What do you think? Will you miss the old characters? Do you like the sound of the new ones? Any casting ideas? Will this move help Body of Proof’s ratings and get it renewed for a fourth season?

I really miss Body of Proof. I wish it would come back.

I can’t even find it on my cable Service. I really miss it. The story lines spoke to the hard stuff. I wish it would come back.

Leave the show alone—-change is not always good. And I liked Bud & Sonja

WHY on earth would they take off Peter?? He was great and had a great chemistry with Meghan! I am so frustrated by this! I also really like Bud and Sam!! I can’t believe they aren’t coming back. This is a bad move for the show and may cost them viewers. I don’t care that they killed off the new girl. It made for a great story line. But I’ve already gotten attached to all the original characters. To get rid of them is ridiculous.

I THINK THE SERIES WOULD HAVE BETTER RATINGS IF VIEWERS HAD BEEN ABLE TO FIND THE SERIES. IT WAS NEVER ON!!!

IT ALSO WAS A BAD MOVE TO KILL OFF THE SPUNKY AMBULANCE DRIVER.

That Adam shaffeur is just a replica of Ethan’s character except he’s a cop!!!!!! Like seriously ABC????

Seriously???????????????????????????? I was starting to like Bud and Sam and I ALWAYS loved Peter’s character and his chemistry with Megan, uhh! Such a bummer, even if I don’t like their ship A LOT of people do, like again seriously??? All of my BOP friends who shipped them aren’t tuning in anymore, they said they’re DONE! Like I might ship Tommy and Megan but I don’t think Megan should trust him anymore cause she deserves WAYYYYYYYYYYYY better, well Bad move, wonder how this works out……….

I think it’s a bad move on ABC’s part! The two cops were coming around! And I hate when new characters come in! terrible!!

Good move getting rid of sohn’s character, she was boring and annoying and I hated her!! As for the other two…I think they should be kept…but I’m excited to see whether the changes make for a better show…I really hope it does…coz I like it, it just needs something else, and hopefully this will do it!!

It’ll be interesting to see what happens…think they should of kept Peter or had a character to replace him…but the two cops were kinda bland and very annoying…bud was getting better though, Sam was just bad….hopefully this will give the show a new spin and make it much more interesting…can’t wait to see what happens!

It’s a really bad move ABC. you guys should have not move the three key player. it’s really out of my expectation. get those three back!!!!! they are all good character……

I totally agree with the changes. Peter was a good partner but I didn’t see any chemistry between him and Dana Delaney’s character. She needs a stronger character that she can play off of. As far as the detectives. I think they should have kept Sonja Sohn. I hope the changes work. I gave up on it when I felt no chemistry between the leads. I’ll tune in because of Dana Delaney and hope the story line gets more compelling.

Bad move!! Don’t change what works but that does not seem to be what the networks do!