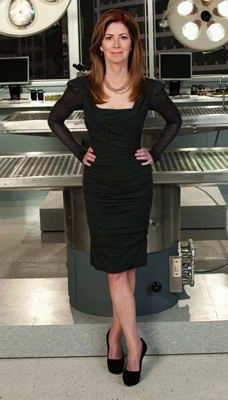 ABC recently debuted the last of their new dramas for this season, Body of Proof. Many of the alphabet network’s successful TV shows are slowly losing viewers so they’ve been trying to establish a new crop of hour series. No Ordinary Family, Detroit 1-8-7, and Off the Map have all been disappointments and are sure to be cancelled in May. What about this new TV show?

Body of Proof revolves around Dr. Megan Hunt (Dana Delany), a brilliant neurosurgeon whose world is turned upside down after a devastating car accident. No longer able to operate, Megan becomes a top medical examiner. Using her instincts and sharp mind, she can uncover what happened to the people that end up in front of her. Co-stars include Jeri Ryan, Geoffrey Arend, John Carroll Lynch, Windell Middlebrooks, Nic Bishop, and Sonja Sohn.

Last week’s debut followed the results edition of Dancing with the Stars. In that plum position, it attracted a healthy 3.1 rating in the 18-49 demographic and 11.15 million viewers. The episode started with a 3.4 rating and ended with a 2.9 rating so, most liked what they saw and watched the whole episode. With such a great lead-in, it wasn’t a surprise that the premiere won the timeslot.

On Sunday, ABC aired the second episode behind Desperate Housewives, Delany’s home for two seasons. That didn’t do so well and lost a third of the Housewives audience, registering a 2.0 in the demo and 8.49 million viewers. Still, the added exposure for Body of Proof was positive and would hopefully lead to more people watching on Tuesday.

That didn’t happen. This week, Body of Proof registered a 2.4 rating in the demo and 11.15 million viewers. That’s a decline of 23% when compared to the debut. That’s quite a drop but a 2.4 is still positive. The Dancing with the Stars lead-in was down by 26% so that’s a pretty good indication that Body of Proof is quite dependent on its lead-in.

While Body of Proof has had a positive start, we won’t know its chances for a renewal for a few more weeks. No Ordinary Family started with a 3.2 rating, fell to a 2.7 in week two and just kept falling. If Body of Proof does that, the series is doomed. If the ratings even off, it should be safe — especially since all of ABC’s other new dramas have tanked.

But, what do you think? Is Body of Proof worth watching? Do you like it? Would you renew it or, cut to the chase and just cancel it now?

Loved this show, bring it back.

Please bring back Body of Proof, I REALLY miss it!!!!!!! Thank You Mrs. Cook

I’ve been wondering too what happened this fall. It had a great season ending and the suspense kills me to find out what happens. Bring it back.

My wife and I love this show…we’ve been wondering what happened to it this fall.

I have never missed an episode of Body of Proof! I love this show. Dana Delaney is great and it is so educational. I hope it is renewed!!!!

My entire family loves Body of Proof and have never missed an episode even if we weren’t going to home we set the DVR so we wouldn’t miss it. Please bring it back.

i loved body of proof and so did my mom. I would love to see it back on the air. i was worth watching each week and i never missed an episode..

I love Body of Proof. I wonder if they are bringing it back since they still have it on their web site. Still, they have not aired the season premiere along with the other shows. Curious.

Please keep Body of Proof on the air ,This is one of the best shows I have seen in a long time. This is the only show I stay up late for, knowing I have to get up early in the morning for work . The whole cast is wonderful, please don’t change not one of them. I look forward to seeing them on the air again very soon . Thank you in advance.

Love body of proof, hope to see it soon.

Body of Proof is one of the best shows to watch, sure hope they bring it back for another season.

We sure do miss body of proof, can’t wait to see it again.

my favorite show. i have not been able to find this show in weeks.
i hope to see body of proof soon.