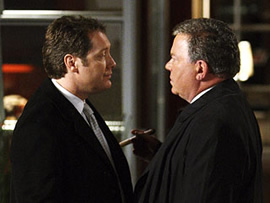 In Australia, we’ve only just now gotten the fourth season on DVD, and of course I watched it the moment I got it. And now to find out that the fifth season will be the last? I’m 23 and I find Boston Legal to be one of the best tv programs on at the moment, never mind that rubbish aimed at younger people, it only makes me want to stab my eyes out. Boston Legal is clever, witty and damn hilarious as well as being serious about current issues. ABC, you need to pull your head out of your arses… Read more »

It was entertaining, blasphemous and totally outrageous at times.It was creatively written and very well acted, but seemed to have little tolerance for different points of vi
ew. Would anyone invite Alan back for next Thanksgiving dinner? Betty White was terrific abd Monica Potter left too soon.

Clever writing… headlines ripped from the daily news… Even when Alan was on the other side of and issue with me…(rarely…) It was thought provoking TV … hmmm a concept lost on ABC execs. They couldnt have been watchiing… all the pot shots BL shot over the bow this season Hilarious!!… I LOVED it!
Mr. Spader sure grew from the “snotty kid” in the Molly Ringwald movies!
Please other networks TAKE NOTE: be clever and throw 8 millon THINKING viewers a bone and keep this brilliant cast intact.

We never watched the show even though friends have been telling us to for several years. Finally in October we relented and loved it only to discover it would be done in December. Luckily ION TV has all the re-runs which we will most certainly enjoy. Best TV show in a long time…..

One of the best adult shows on the tube; everyone knows that these programs can’t go on forever, but this one certainly had many topics of today’s world to draw on.

What’s next to be axed — House?

Eight million constant viewers aren’t wrong…Boston Legal deserves to be put back on the air. Hopefully another network will pick it up if ABC doesn’t. With all the crap shows on ABC each week, i.e., the Jim Belushi shows that they repeatedly air, one would think that ABC would realize that Boston Legal fans want not only for the show to be renewed but to also have it on in a CONSISTENT time slot…NEVER varying. Some people had a hard time just trying to find the show at times because ABC kept flipflopping the times/dates. We need Alan, Denny, Shirley,… Read more »

I love BL. It’s the most intelligent and brilliantly outrageous show on TV today. It’s one minute hilarious and the next minute poignant. Shatner and Spader are a stunning pair of actors; together they’re amazing. Candace Bergen…equal kudos to her. Of course, the writing is fabulous, the casting impeccable. Please bring it back!!!!

Absolutely our houses favourite show!! No other show is as well written as BL.. we will really miss it!!

Well ABC…. you blew it again! What a great show Boston Legal has been and I guess only us older folk get the back slap humor that it provided each and every week. I can’t say the same for all the reality shows that proliferate the airs today. How sad that this is what our society has come to (who can out smart who and get them kicked off till we’re down to one). Can’t anyone at any of the networks come up with anything more creative than that slop? How boring that we go from channel to channel and… Read more »

Apparently this show had too much truth in it for ABC to handle. I will miss it greatly. It has been my favorite show and the only thing I really care to watch. It is a very sad day for me.

fasce it??? what kind of ebonics is that?

let’s fasce it, the show got axed because it was a leftist, liberal piece of garbage!!!!

Please bring the show back I really miss it…

I loved Boston Legal but I could never seen to find it as the days always seemed to be changed or the show was cxled for some other show. It got very confusing.

I thought it was being done on purpose as the subjects on the show were so controversial that I thought the sponsors were afraid. I guess I won’t be watching much of anything anymore as everything else seems so inane.

I miss Boston Legal already. It was one of my all-time favorite shows. It was so smart and funny. I guess that’s the problem … it ended up being too smart for ABC execs … they just didn’t get it. It makes me upset that ABC execs never even got behind the show. I’m very sad to see it go, but I am so glad that the show got a proper send-off and wasn’t just cut off without any closure (like so many other great shows).