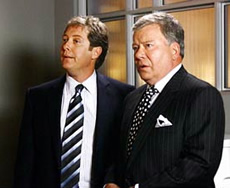 ABC may have cancelled the Boston Legal TV show after 101 episodes but it’s clear that there’s still stories left to be told. Will the new marriages last? Where will our favorite lawyers end up?

Many believe that the series shouldn’t have ended just yet. Though the show’s ratings have dipped over the years, the numbers aren’t that low. These days, some networks would love to have that many viewers. The show often comes in second against CBS’ dominant CSI: Miami.

Would you like to see this award-winning dramady continue in some way — perhaps as a TV movie, a spin-off, or even as part of David E. Kelley’s new legal drama? If so, sign the petition below and make your case for continuing to follow the crazy exploits of Alan Shore and Denny Crane. Write to the studio and the network and tell them you’d like to see the characters live on. Go ahead, channel your “inner Alan Shore.”

We, the undersigned, greatly enjoy watching the ABC TV show, Boston Legal. The series is truly a unique program, continually controversial, outrageous, and touching — often at the same time.

We’re truly sorry to see this wonderful show come to an end and are not ready to say goodbye to the attorneys of Crane, Poole and Schmidt. Please consider continuing the escapades in some new way, perhaps as a TV movie or a spin-off. There are millions and millions of loyal Legal viewers who are waiting to see what happens next.

[…] final. The show still has a pretty good fan base who like what it’s producing, and website TV Series Finale argues it’s […]