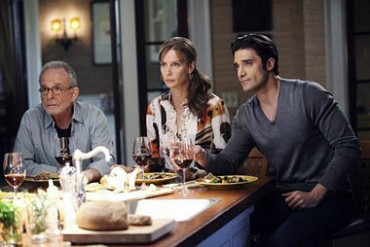 Rachel Griffiths recently made news when the Brothers & Sisters star noted that she would soon be unemployed. Brothers & Sisters fans take their show very seriously and are well aware that the show could very likely be cancelled in a couple weeks.

Zap2It reports that Gilles Marini, who plays Griffiths’ on-screen fiance, believes that Griffith was joking around and says he hasn’t heard anything about a cancellation. He also noted that “Maybe, she hears things that I don’t.”

If he has his way, Marini would like to see Brothers & Sisters have one final season to wrap things up. He said, “There’s so many more storylines… ABC would be giving their respect to the audience and the 80 countries that watch this show. Close it well. It doesn’t cost that much money. We’re already in syndication. The show did well for the network. Hopefully, they give it another season and close it well.”

What do you think? Does Brothers & Sisters deserve one more season to wrap things up?

THIS WAS A GREAT SHOW AND IT HAS A GOOD STORY LINE AND SUCH A TALENTED CAST ITS A SHAME THAT THIS MAYBE THE LAST SEASON WHEN OTHERS SHOW ON TV SHOULD BE TAKEN OFF AND ARENT. I LOOKED FORWARD TO SUNDAY NIGHT EVERY WEEK TO BE A PART OF THIS SHOW. PLEASE DONT TAKE THIS SHOW OFF ITS A GREAT SHOW!!!!!!!!!!!!!!!

PLEASE ABC, CONTINUE WITH THIS SPECTACULAR SHOW, IÁM FROM MEXICO AND I JUST LOVE IT. I THINK IS NOT ONLY AN ENTRETEIMENT, REALY YOU AND ALL THE ACTORS MADE A EXAMPLE OF A FAMILY UNION AND THIS IS GREAT IN THIS HARD DAYS .IÁM TELLING YOU I´JUST FELL IN TO A THE WALKER´S FAMILY I LOVE ALL OF THEM AND OVIUSLY A WANT MORE AND MORE SEASONS….MUCH MORE. THANKS.

I’m glad to see that I’m not the only one disappointed that “Brothers and Sisters” will no longer be on the air. Just when Sally Field’s character was about to have, what seemed like, a real love interest with Beau Bridges’ character. (By the way, Beau was looking sexier than ever), but I digress. We, the fans–though we may not have added up to the numbers that would satisfy ABC enough to have kept the show on the air–we absolutely deserve one last season, out of respect for the characters, as well as the time that we did invest in… Read more »

I am so disappointed in ABC. This is my #1 television show. The story lines are never disappointing, the acting is superb, and it keeps you breathless for the next chapter! Please keep this going and finish their stories.

I am outraged! They should’ve cancelled Desperate Housewives. Finally a family drama that brought Sally Field back and showcased her acting talents (among others). I am a huge Brothers & Sisters fan, but am absolutely done with ABC! No B&S, no ABC at our house.

I totally agree with Cathy how this was the best show on ABC or any channel for that matter and how can they even think of taking it off the air. The cast and storyline was the best and like nothing else on TV! Horrible mistake to take this one off the air ABC! BRING IT BACK!!!!!

I have had with ABC!!! First they cancel my ALL-TIME favorite soaps All My Children and One Life to Live, now they’ve axed Brothers and Sisters… There is no closure to the story lines and it reminds me of what happened to the show Las Vegas. There was a strike in TV-land and then the show was gone with no closure. I don’t even care that Desperate Housewives will be back for however many seasons they keep the show, I can’t continue to support a station that doesn’t care about it’s viewers. I would also like to know where the… Read more »

I just heard the news of Brothers and Sisters being cancelled! I’m so upset. I looked forward to it every week. I always enjoyed every episode. I can’t believe that the last episode was the final for the series!! I think it’s a terrible decision for ABC. It was a wonderful show and to leave us all hanging without resolution isn’t fair to those fans who have been dedicated for 5 years!

The days of secure television series are gone. I looked forward to watching this family on Sunday nights. I am worn out with crime scene dramas and reality shows. Please put something back on that is family related and not comedy or reality dysfunctional.

Oh My Gosh – They ARE my family. It s like they have all died…I am greiving! How can you just cut it off with out finishing it? It was like Knots Landing many, many years ago, at least they had a final season. I can’t belive that I will have to find something other to watch on sundah night – Hate Desperate Housewives…

Are you kidding. Families can all relate to the characters in this show. My daughter calls me and I call her every episode or we are texting throughout with the joys and sadness that exists in these very human relationships. It is a show that has made me grow and evolve as I appreciate the tenderness and commitment between two gay couples at totally different ages having gone through similar yet different struggles to have their lives affirmed.
ABC shame on you.

I watch Brothers and Sisters every Sunday night. If I’m not going to be home, I make sure it’s recorded so I never miss a show. Why cancel such a good show with such great acting and story lines? I’ll never understand.

One of the BEST shows ever to be seen on ABC and you’re going to give it the ax? Totally uncalled for – you really need to re-think a very poor decision on your end.

Please at least let Brothers and Sisters at least have a wrap up season. There are so many story lines open. Kitty’s pregnancy, Sarah’s relationship with Brody,not to mention Nora’s. Scotty and Kevins’ new son. One more season would be great.

BECAUSE IT IS A VERY GOOD SHOW AND A DESENT SHOW. WITH ALL THE OTHER .VIANCEL SHOW THIS WAS A NICE SHOW. GOOD STORY LINES . IT DESERVE A SIXTH SEASON TO RAP THING UP NOT FAIR TO THE ACTOR AND ATRESSES. THAY ARE ALL GOOD GOOD PERFORMERS

What a disgrace to cancell this show. To many actors with great talent. To many story lines left to finish. Im done with ABC all together. I hope another network picks it up they will have lots of followers.