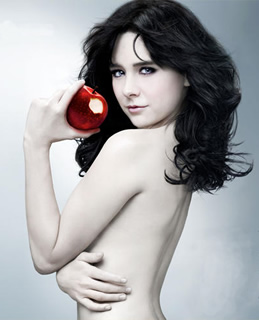 A prequel to the successful Battlestar Galactica series, Caprica has officially debuted on Syfy. Will it engender the same love and respect that BSG did or will viewers be happy to see it go?

Caprica got off to a slow start on Syfy with an audience of 1.6 million viewers for the two-hour premiere. That’s well below some of the network’s other sci-fi premieres and average audiences.

It surely didn’t help that the first half of the debut aired against the Hope for Haiti Now telethon that attracted over 80 million viewers on other stations. The premiere has also been available for sometime via other means; including a year-ago DVD release and various online outlets. Syfy estimates that some two million people have seen the pilot through iTunes and online streaming alone.

Syfy has ordered 19 more episodes for this freshman season so the next several weeks will really tell if fans are interested in the pre-BSG universe or not. The series has certainly gotten enough positive reviews from the critics.

What do you think? Is the Caprica worth revisiting week after week? As enjoyable as BSG? Cancel or keep it?

I watched the premier event ten times before the January 22nd airing and only watched it again because the Dollhouse Finale and Smallville was interrupted by Hope for Haiti. I think that if a network wants ratings on the night a new show premiers, then that network shouldn’t make it available weeks in advanced on several different mediums.

Does the reviewer realize that it also aired over a month ago? it also was available via OnDemand during the fall of 2009 I didn’t watch it because I had seen the pilot episode already, as I’m sure alot of other people did, so they just skipped it.

Fridays’s is all new, lets see how the ratings look then

you mean you don’t think having WWE on the SciFi (i refuse to recognize the new SyFyllis) Channel is a good programming strategy????

i disagree a bit with your assertion that SGU and Caprica are more like “real” science fiction. both of those shows are closer to soap operas. that is what SyFy has said they wanted. that way it attracts more viewers (mainly female).

also, Caprica contradicts events in BSG (which is another reason to be upset with the writers).

if you didn’t like BSG then i don’t see how you could like Caprica. but everybody’s different.

Caprica has not captured my imagination. I won’t be watching this program. SciFi made a HUGE mistake by pulling the plug on BSG, which had quite a few more years of life left in it. In general, I have been watching less and less SciFi Channel because I don’t agree with their programming strategies. Good programs come along and show they have the audience numbers to continue and some stupid exec decides to pull the plug.

Oddly enough, I was never a fan of the new BSG — it just never grabbed me — but I just finished watching the first episode of Caprica and was quite pleasantly surprised. It sorta’ reminds me of an extended “Outer Limits” episode, but I always liked that too! So even though I never watched BSG, I think I’ll actually make a point of catching this series. Both it and “Stargate: Universe” seem more like “real” science fiction (e.g., the sort of thing you read in novels and short stories) than the “sci-fi” that’s more commonly found on TV. Of… Read more »

i just hope that when it comes time to wrap the show up, the writers don’t butcher the finale like they did with BSG.

i am still upset how they decided to end the series.

I think a part of the problem with Caprica ‘was’ the fact that the DVD ws released last year, so I know that at least for me, I wasn’t sure if I had missed something because I hadn’t seen the DVD.

These kinds of dual-release concepts really don’t work out well. The studio may see it as an additional revenue possibility but personally I think it was just confusing.

LOVED BSG. All prequel storylines are building blocks; give it time to blossom.

Im Sure Ratings will pick up in the next few week so i think it wont be a problem, BTW I thought BSG finale Was great it was the Best way to end The Show IMO,

Keep it going, put up the buzz, and don’t move the showtimes.

Why do you consider the ratings unimpressive? What kind of numbers were you expecting for what was essentially a re-run? Why make a pointless apples to oranges comparison to the ratings of brand-new episodes?

I was so disappointed with the BSG finale that I’m not going to watch this show.

I agree !! I enjoyed BSG: The Plan better than I did the last episode of BSG. I saw Caprica early last year (a friend works for the studio) and fell asleep on it. I wasn’t impressed with it at all. Just like Stargate Universe, I wont be watching Caprica.

If given a chance I think this will be as popular as BSG was. I loved the ending and can’t wait to see his “Cylon Daughter” create havoc…..

Does the author even know that the pilot was released on DVD last year? Or that the pilot has been available to stream on several sites for over a week? Of course the ratings for the TV broadcast are going to be down, but that doesn’t mean no-one’s watching!

The proof is in the pudding, lets see how the next episodes fair on TV. Where there aren’t any other mediums available to fans.

I think the author knows that since it’s in paragraph four.

Really? That’s strange, because if it was actually considered as part of the actual question, there wouldn’t be a need to write an article about the question.

Caprica is a good show hopefully sci fi will give it a chance to mature and grow,I feel by the third show the numbers will start to increase ,they have in the past given new shows a chance and not be like showtime and the rest and up and drop them.The story makes you think and the writers and directing is very good also.