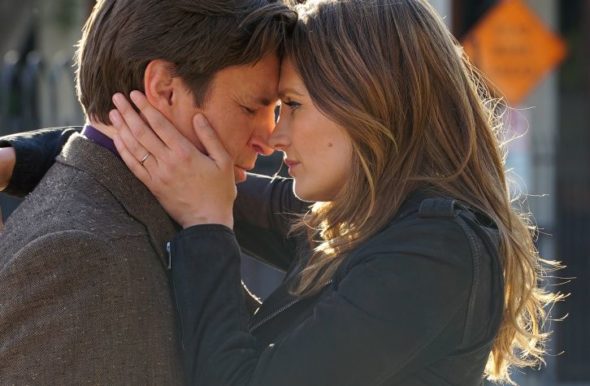 The Castle TV show on ABC has been canceled after eight seasons. Despite re-signing Nathan Fillion, Seamus Dever, Jon Huertas, and talking to Molly Quinn, Susan Sullivan, and newcomer Toks Olagundoye about returning for a ninth season, Castle‘s eighth season finale will now be its TV series finale.

Once the network chose not to re-sign Stana Katic and Tamala Jones, reportedly for budgetary reasons, fans were not so keen on a Castle renewal. The backlash was rather epic. Much of Castle‘s draw was the relationship between Katic’s Kate Beckett and Fillion’s Richard Castle. Castle season eight, episode 22, “Crossfire,” the Castle TV series finale, airs Monday, May 16, 2016. Watch a promo, below.

ABC says: “With their best lead in hand, Castle and Beckett are ready to take on LokSat. But an unforeseen twist puts their case – and their lives – in jeopardy, on the season finale of “Castle,” Monday, May 16th on ABC.”

Hopefully, Castle fans won’t be left dangling without sufficient closure. As previously reported, EP Alexi Hawley planned a second ending to “Crossfire,” should it prove Castle‘s final episode, rather than the jumping off point for a ninth season.

Idiotic move, cancelling both Castle & Nashville, just like Body of Proof &
Forever in the past. ABC cannot hope to get ratings on par w/any of these shows in their 3rd hour w/a new show. No wonder they are in such bad shape in the ratings race.

My husband and I are heartbroken, Castle w,as our favourite show! The network people are idiots. :-/

I love Nathan Million and feel like the show had an amazing missed opportunity to focus on the detective agency; with a great back up/assist from his “besties” at the station. What a horrible waste of talent and comraderie. I was looking forward to the new direction.

Hope they filned a second ending in case it wasn’t renewed. There is no Castle without the Beckett/Castle story or the group as a whole…

They say that two endings were filmed: one to close the show and one to set up the possible continuation of it if it were renewed.

My favorite show! Why are you cancellling?

Best news yet Castle without Stana was a no go.

I don’t watch Castle for Beckett, & frankly I never cared about their romantic relationship. I feel like Nathan Fillion & the rest of the great cast could’ve pulled off a 9th season. ABC could’ve, at the least, given them a chance… Sucks that it’s ending like this

Uh, gee, over a month ago it was announced that Stana Katic and Tamala Jones *did not* want to do another season, not that ABC “chose” not to re-sign them over “budgetary reasons” (a load of corporate crap). Well, I agree with many–better to cancel the show, even without a series finale episode, than to carry on without Stana and Tamala (especially Stana, no offense, Tamala, I do love you, too!).

As sad as it is, in retrospect, I think it’s better than season 9 without Beckett; Castle is the lead, granted, but the show has always been about the two of them. When I first read Stana Katic hadn’t been invited back, my first thought was I hope they don’t kill off Beckett. I can now lay that fear to rest.

A happy ending would be great: Kate pregnant, couple moves to Paris since the two co-stars were talking about it in a recent episode.

Or even the cross-country motorcycle ride. It seems a shame to introduce Castle having her bike restored only to do nothing with it.

You’ve got to be kidding!! One of the best series on. TV! Perfect combo of drama and comedy.

Yes, there were going to be problems with Castle with Stana and Tamala being written out. but renew American Crime and The Catch over this? With their pathetic ratings? What a joke.

There could have been another love interest….what with the great scripts, interesting plots, and Castle still there…it didn’t have to end.

Uh, no. It took FOUR SEASONS before Castle and Beckett got together. And, Beckett is THE true love of his life. Another love interest? It wouldn’t happen for MANY seasons. What would happen without Beckett? Castle would brood and be drunk and withdrawn for MONTHS’ worth of episodes. he might not even reach a level of normal for YEARS if that happened to him. That wouldn’t make for a very good show.

That was my first thought, too; the ‘love of his life’ part, anyway. He even admits in “Reckoning” that just two days of not knowing where she was was enough to almost kill him; losing her forever would destroy him. Not as a character, necessarily, but as a human being and a husband. He’d move on, certainly, but I doubt he’d ever find someone he loved like her. Kind of like Gibbs on “NCIS”; he’s been married four times, but he can’t love any of his other wives as much as he did his wife Shannon (coincidentally, played by Darby… Read more »

Never wanted to read this on this website. But it was pretty much a given. RIP to Castle.

Thank Odin for this, I wasn’t planning on watching another season without Stana Katic. It would have been an abomination. At least the series will go with dignity.