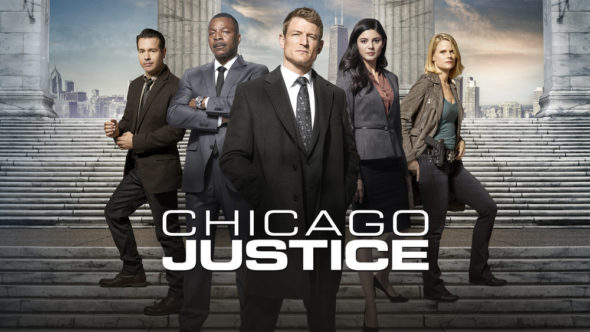 TV show description:
The fourth series in Dick Wolf’s Chicago franchise, the Chicago Justice TV show follows the prosecutors and investigators who make up the State’s Attorney’s team. In order to pursue justice, these professionals must negotiate the choppy waters of city politics.

Armed with a resolute respect for the law, they work the Windy City’s most consequential cases. Often under intense media scrutiny, the team must be mindful of both prevailing community sentiment and political power grabs.

The ambitious Peter Stone (Philip Winchester) is the dogged Deputy Chief of the Special Prosecutions Bureau. To him, the quest for justice is more than a job; it’s a purpose.

A single-minded man, Stone often goes head-to-head with Mark Jefferies (Carl Weathers). As Cook County State’s Attorney, Mark must be politically minded. While his mantra is that a good prosecutor gives the jury and the public a well-defined narrative, Peter believes the law is not always best served by crisp sound bites.

Despite their differences, Stone and Jefferies aspire to usher in a new age of justice to the City by the Lake. Their team includes the ardent Assistant State’s Attorney, Anna Valdez (Monica Barbaro). Still new enough to be malleable, Anna will bend the rules to get the proper results.

Finally, there is Chief Investigator Antonio Dawson (Jon Seda). A former by-the-book detective in the Chicago P.D.’s intelligence unit, Antonio worked his way up to the State’s Attorney’s office.

Series Finale:
Episode #13, “Tycoon”
Stone, Valdez, Nagel and Antonio go after a billionaire real estate tycoon who may be responsible for his son-in-law’s sudden death at a construction site. (Courtesy NBC.)
First aired: May 14, 2017.

What do you think? Do you like the Chicago Justice TV show? Should it have been cancelled or renewed for a second season on NBC? Tell us.

I like all the Chicago series. I think this would have done better if it was in a different time slot. Sunday’s are a tough night for most people to sit down a watch a show. I would take it and watch later in the week.

I think it should have been renewed…it fit in well with the 1st three…it always happens…you start to like a show and its characters, and it gets cancelled… PLEASE BRING IT BACK….

I am a fan of all the Chicago shows. I felt Chicago Justice was better than Chicago Med as far as people who can actually act, so not sure why this show got the axe. It has been awhile since we had a good new law show. Bring it back.

I really liked the show. I especially enjoyed how all the Chicago series were intertwined, bringing in PD, Fire, Med, and Justice was an awesome idea and made for interesting continuous story lines….much like what really happens. I was really disappointed to hear it was cancelled…bad move!

out of all the Chicago series, this one could have stood on its own.
attention cbs, abc or even fox: pick this one up, and avoid crossovers to the other Wolf series.

Of all the “Chicago” series, Chicago Justice was my favorite and the only one I watched last year. I am so disappointed to learn it was canceled. Please bring it back. All I watch are LAW and ORDER reruns (original and Criminal Intent) and seen the same ones 4 or 5 times for sure.

I too enjoy Chicago Justice. I am kind of tired of Law and Order SVU, its always the same. Please bring back Chicago Justice. We already know about the Mendez brothers, it happened years and years ago. Chicago Justice is much better. Please air that instead. Thank you.

Completely ridiculous about having the show cancelled. Why do we need another Melendez brothers series. Why are they in the spot light again? Why do we need to be reminded of them? Please bring back Cgicago Justice, my newest favorite show from my favorite franchise Chicago.

Please bring Chicago Justice back on. You have to bring it back for all the other Chicago Shows You can learn from Chicago Justice. The Menendez brothers. Who cares.

You’ve got to me kidding me! “Menendez brothers” instead of Chicago Justice. That is truly an injustice!

Well this makes me sad!…I thought this was great addition to the “Chicago” series. Being from Chicago suburbs and now living in Alabama this was included in my favorite shows!

I cannot believe some of the other garbage on TV that stays year after year, while good shows like this one are given one season and then cancelled. REALLY!!!! Bring it back and give it a chance and get rid of all the real garbage!

I really enjoyed Chicago Justice and it’s link to the Chicago Fire, Police and Med. Very sad to see it canceled. There is so much garbage on tv and this series is not one of them. I hope they bring it back.

I liked the show it was great I have watched Chicago fire Chicago med & justice all from day one please renew Chicago justice give the show another chance.