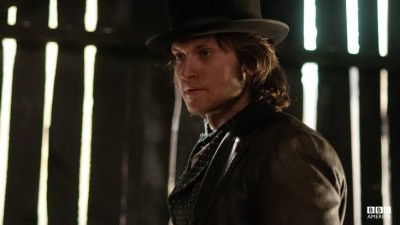 BBC America has renewed Copper, their gritty period drama, for a second season of 13 episodes. There’s no word on when they’ll air yet but the 10th and final episode of the first season airs this Sunday.

Set in New York City in 1864, Copper follows Kevin Corcoran (Tom Weston-Jones), an Irish-American former boxer. He returns from the Civil War with wealthy Robert Morehouse (Kyle Schmid) and African-American Doctor Matthew Freeman (Ato Essandoh) to find that his wife is missing and his daughter is dead. As a police detective, he devotes himself to seeking justice for the powerless in the Big Apple.

BBC AMERICA RENEWS “COPPER” AHEAD OF SUNDAY’S SEASON ONE FINALE

New York – October 18, 2012 – BBC AMERICA has renewed its first original scripted series, COPPER, for a second season, ahead of the season one finale this Sunday, October 21 at 10:00pm ET. The channel has re-commissioned the drama with an increased order of 13 episodes from Cineflix Studios.

In making the announcement, Perry Simon, General Manager, Channels, BBC Worldwide America said: “BBC AMERICA’s first original scripted series, COPPER, has proven to be a perfect fit for the channel. Our viewers have made it our highest-rated series premiere ever and highest-rated drama series ever. Production led by Tom Fontana, Will Rokos, Barry Levinson and Christina Wayne, along with the cast from both sides of the pond, truly captured the boiling pot that was New York City in 1864. We can’t wait to get started on the second season.”

From executive producers Academy Award(R)-winner Barry Levinson, Emmy(R)-winner Tom Fontana, Academy Award(R)-nominee Will Rokos and Cineflix Studios President, Christina Wayne, COPPER follows Detective Kevin Corcoran (Tom Weston-Jones), a rugged Irish immigrant cop, as he seeks justice for the powerless in 1864 New York City. The series has been building to this Sunday’s explosive finale that will change lives and the city forever. With Confederate terrorists threatening to destroy the city as they know it, unexpected traitors will be revealed and once air-tight bonds will be broken beyond repair.

The series has received a warm reception from critics including “four stars” from the New York Daily News. The Los Angeles Times called it an “impressive piece of work” – San Francisco Chronicle said “COPPER is gold” – and Entertainment Weekly commented the “premiere hums with menace.” The fresh young cast has also received recognition including TV Guide Magazine proclaiming: “Cheers to Tom Weston-Jones for his star-making turn in BBC AMERICA’s COPPER.”

“COPPER is an ambitious series and its success is truly a testament to Tom Fontana, Barry Levinson and the creative voices that worked on the production,” said Christina Wayne, Cineflix Studios President. “We’re absolutely delighted to partner again with BBC AMERICA, Tom and Barry. We look forward to working together to make the second season even more compelling.”

COPPER is a Cineflix (Copper) Inc. production in association with BBC AMERICA. COPPER is created by Tom Fontana and Will Rokos. Season one executive producers include Levinson, Fontana, Rokos, Wayne, Jim Finnerty, Sherri Rufh, Sam Berliner, Sally Catto and Katherine Buck. The production was shot in-studio and on location in Toronto, Canada.

BBC AMERICA delivers U.S. audiences high-quality, innovative and intelligent programming. Established in 1998, it has been the launch pad for talent embraced by American mainstream pop culture, including Ricky Gervais, Gordon Ramsay, Graham Norton, and successful programming formats including ground-breaking non-scripted television like Top Gear and top-rated science-fiction like Doctor Who. Owned by BBC Worldwide, the commercial arm of the BBC, BBC AMERICA has attracted both critical acclaim and major awards including an Emmy(R), five Golden Globes(R) and ten Peabody Awards. The channel attracts one of cable’s most affluent and educated audiences and is available on digital cable and satellite TV in more than 79.5 million homes. It broadcasts in both standard and high-definition, with content available On Demand across all major digital platforms. Online, www.bbcamerica.com is the place to go to dig deeper into pop culture with a British twist.

Cineflix Studios is an independent entertainment company operating worldwide with a mandate to offer channel-defining scripted programming to international broadcasters. Cineflix Studios partners with producers on premium projects, bringing our creative, co-financing, and distribution expertise. Launched two years ago,Cineflix Studios has built a strong foundation and a team known for their work on Emmy(R) Award-winning shows including CEO Peter Smith, President Christina Wayne, and President of Production Vlad Wolynetz. With a global focus, Cineflix Studios has offices in New York, London, Los Angeles, Toronto, and Montreal, and severalprojects in development in the US, Canada, and the UK.

Cineflix Media Inc. is an international media company that brings together global broadcast and production partners, major talent, and key executives to create top quality original content produced and distributed for television and other platforms. Producing more than 400 hours per year of multi-genre television for international broadcasters, and with a rapidly expanding library of3000 hours, Cineflix Media is a recognized leader with offices in Montreal, Toronto, London, New York, Los Angeles, and Dublin.

What do you think? Are you a fan of the Copper TV series? Glad to hear that it’s been renewed for season two?

What’s taking so long???? Feels like we’ve been waiting forever for season two! TV is becoming less and less worth paying for so we need shows like this to help out. I’m so tired of all my fav’s being cancelled before I hardly know they are on line. People now spend more time talking about what they don’t like on TV than what they do like. More advertising of new shows is required. Waaay too long an interval for this show. All shows take too long. What’s wrong with shows being on from Sept through May like they used to… Read more »

I am so thrilled that finally a show I watch faithfully is going to a second season . I feel that all of the shows I watch in a new season are rarely given a second season ie Alcatraz Thank You BBC

I really like this show. I have had to juggle episodes of ” COPPER ” with AMC’s ” The Walking Dead “, though. BBC America has some great programming ! I need TiVo. 😉

Happy “Copper” has been renewed. Hubby and I both watch this show and recommend it to everyone.

copper is the best show i have ever seen.i cannot wait for sunday to get here.i hope it stays on for a long time.

this is an amazing show.hope it is on for a long time . my favorite part is when sunday is on.copper is a very show.

LOVE this show…..both my husband and I are so glad it was renewed and hope it will be a staple on BBCAmerica for quite awhile!

I love this show there a few TV shows which are on my CAN NOT MISS list and this is one of them. The story lines are exciting and interesting. Now that he’s found his wife I can hardly wait for the next episode.

The number of shows on my ” CAN NOT MISS ” list has fluctuated & dipped somewhat over the last few years, but Copper is definitely on there. Hope it’s on for many MORE seasons !

I’m very glad to learn that Copper will have a second season. I love period drama, and these characters grow on you. The opening music is excellent. The sets and costumes pull you in. How about releasing a CD of music from the show?

So glad to hear that the show has been renewed for a second season. There should be interesting story lines ahead now that Copper has found his wife. I can’t wait for the second season to begin. It’s great when historical events are interwoven with Copper stories.

Reader
Fake Me Out

Fantastic news for a fantastic show! Obviously it’s not a show for everyone but I highly recommend you give this show a try if you have not already sampled an episode or two. I rank it as one of the top five shows on television today and anxiously look forward to S02 in (likely summer) 2013.

I have tried to like this show, but my vision is not good and most of the show is so dark that I can’t tell what’s going on.

And now a dose of reality.

Copper is delivering around 450,000 viewers in its regular slot.

Yes, that’s right. A far cry from the numbers in the press release.

Now, I don’t know what numbers Doctor Who is delivering for BBC America, but I’m expecting they’re higher than that.

Looks to me like executives who made a bad bet doubling down in hopes nobody will notice the ratings cupboard is empty (and the show utterly mediocre).

I love this show! My daughter and I cannot wait until Sundays when this airs! I am so glad it was renewed for another season!! Yeah!!!! Bring it on!!!