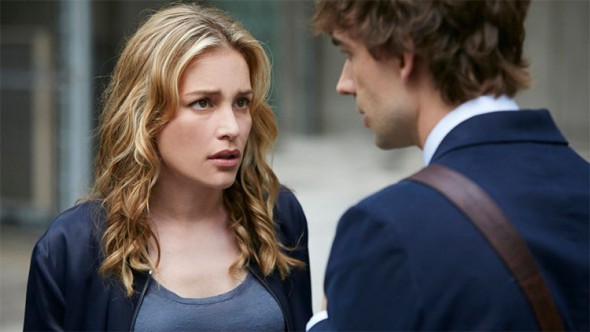 The cast of White Collar got a chance to wrap up their series with a final short season but Covert Affairs won’t get that chance. USA Network has cancelled the series after five seasons, leaving fans with plenty of questions and no season six.

The move to abruptly cancel the adventure spy series comes as a bit of a surprise but the decision reportedly all came down to money. USA owns the show but it’s not a cheap show to produce with rising talent fees and expensive location filming around the world.

In addition, the fifth season of Covert Affairs saw a big drop in the ratings — falling nearly 48% in the 18-49 demographic when compared to season four. Total viewership dropped 32%, to 1.54 million.

The final episode aired December 18th. Hopefully the producers will share what Annie’s decisions about her personal and professional life would have been.

What do you think? Do you like the Covert Affairs TV show? Do you think it should have been cancelled or renewed for a sixth season instead?

Here we go again….this is why I don’t even want to try to start any new shows. None of the good ones are given a chance. Yet, we are constantly bombarded by network executives throwing trashy reality tv in our faces. I think it’s time to cut the cable cord & get Netflix. At least I can go back & watch the ghosts of good tv.

not surprised in the least.

Why would be my first question. I was really looking forward to season six of covert affairs one of my most popular shows. Maybe another network will pick it up but that is highly doubtful. It’s a shame the TV networks can do this without explanation. Perhaps it’s time to stop watching USA network.

why? how about its HORRIBLE ratings

I’m so sorry to see this show! This show was a breath of fresh air! It’s a thinking persons program. Maybe they could rework it so they could stay closer to home. I do enjoy most of the shows on USA network!

This is really dumb. People have been watching this for five years and you leave up in the air and close shop. It is the last series that I will ever watch on your network.
Jim Dennen

I am so tired of these Networks canceling all the Great plot driven shows. Just to bring more Reality TV. I’m so bored and frankly fed up with this crap from all Networks. Let’s get back to good ol’ tv shows that have meaning or points to make. Just like let’s say MTV I remember when they actually had music on that channel after all it stand for Music Television. They had music videos and concerts all day and night. Now they only show real music entertainment from 3am- 6am! The only reason I know is because I have insomnia.… Read more »

I didn’t watch it a whole lot, but I certainly think much more of it than these shows they have now like this “Chrisley” crap, and “Benched”, and these other shows that just want us to hear people cuss.

At least Suits, though the cursing can get a bit ludicrous, has a great story with likeable characters. I don’t think I can say the same for some of the other USA shows (curse-heavy or otherwise).
Nevertheless, Covert Affairs’ demise still saddens me since I’m kind of in the same boat as you with regards to watching.

I didn’t care much for all the location stuff… Wish they had saved their money and stayed more local, so they could have kept the series going. I actually liked the earlier seasons best anyway, when it was a little lighter and simpler.

Not doing a happy dance after hearing this bad news! Love Covert Affairs! Have never missed an episode. It was so lame of the USA Network playing games with the scheduling — viewers didn’t know when it was on. I’m glad my DVR was smart enough to always find new episodes. I think USA should have let us loyal viewers have closure with a series finale. Shame on them! So NOT pleased about this cancellation!

Oh no, My favorite show. Can’t believe they just dropped it. What a bummer. Maybe Netflix will pick it up like they did with Longmire.

I loved the show from the beginning, it transformed greatly the most to me in season 4. And I was enjoying it..sad to see it go, would love perhaps a rap up mad for tv movie or it on the big scteen.

Just when it started getting good again, you give up on it. I’m truly tired of the mindless drivel on TV today. When a good show comes along it doesn’t last so that we can cater to the mindless idiots out there who watch reality tv. Please don’t end it and leave us hanging. At least do one more season and close it out like you did White Collar. Please!!!!!

I LOVE THIS SHOW – DON’T CANCEL IT.

yes. it should have at least had something to wrap it up where fans knew it was the end. very disappointed