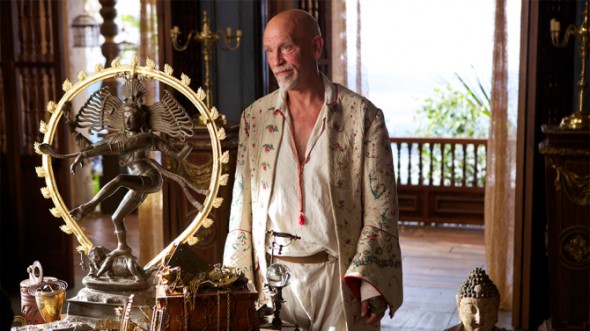 NBC has decided that their low-rated Friday night drama, Crossbones, will now wrap with a pair of episodes on Saturday August 2nd. The installments had previously been set for Friday, August 1st and Friday, August 8th.

Though the network hasn’t said that Crossbones has been cancelled, the ratings have been terrible and it’s highly unlikely to return for a second season.

Crossbones revolves around the life of Edward Teach (John Malkovich), better known as Blackbeard the pirate, and his desire to aquire a valuable invention called the longitude chronometer. Others in the cast are Yasmine Al Massri, Richard Coyle, Claire Foy, David Hoflin, Tracy Ifeachor, and Chris Perfetti.

Here are the schedule notes:

08/02/2014 (08:00PM – 09:00PM) (Saturday) : Blackbeard sets sail, setting the endgame in motion… and testing the loyalty of his crew to the limits and beyond. Back on Santa Compana, Kate trusts Tom Lowe with a startling request… that leaves him minutes to save both their lives. TV-14 V

08/08/2014 (08:00PM – 09:00PM) (Friday) : BEN STILLER EMBARKS ON A JOURNEY OF A LIFETIME TO TEST HIMSELF – World-renowned survivalist Bear Grylls (“Get Out Alive with Bear Grylls,” “Man vs. Wild”) meets actor Ben Stiller (“Secret Life of Walter Mitty”) on the rugged mountains of the Isle of Skye in Northern Scotland to go on a once in a lifetime adventure. As they explore their surroundings Bear tests Ben’s limits in an effort to see how he measures up to the unpredictable and unforgiving challenges of Mother Nature. TV-PG L

What do you think? Have you been enjoying the Crossbones series? Would you watch a second season or, should it be cancelled?

Absolutely love this show. It’s on a par with game of thrones, the last ship, black sails, to name but a few. Really good & really disappointed that I’ve just watched the last episode. Wish grey were bringing this back!!

To bad it was canceled. I would have liked a second season.

Why are all the great shows cancelled. Loved this series, never missed it and was hoping it would return for another season. Please bring it back and we shall all be happy.

I wish crossbones had not been cancelled. It was great tv. Well written, great characters, fun to watch. It took me a couple of episodes to find it rhythm. Miss it please bring it back.

Great show it’s so sad that a good show with a great star would be canceled and that piece of garbage the
Kardashians is still on the air. Try new writers anything to make it more appealing to a wider audeance big mistake to let this go.

We love this show. .. nothing else on nbc is ever worth watching and crossbones comes along. John malkovick is probably the of only actors I can think of that could pull this part off. Just as the story was really getting good we find out that it’s cancelled? Sell to a different network, different week night, something. No one I know even knew if it’s existence until I told them about it and they love it too.

This show was really good, when i figured out this show existed i ended up binge watching all the available episodes. I have been waiting for it to come back on to only realize it got canceled. I hope they bring it back!

I seldom watch NBC, because they don’t have much to watch so I as many people found this program by mistake. I couldn’t get enough of the show. It is a shame that they finally did something right, that I thought networks forgot that not all people like those stupid reality shows. In 20 years what do you think they will watch on Nick at Nite Honey Boo Boo or Crossbones???? Maybe they need to put it on a week night and advertise it better. BRING IT BACK, PLEASE!!!!!!!!!!!!

I miss this show. I can’t believe it got canceled please bring it back

3/30/15 I just saw a posting from Diane that NBC will show Crossbones in August; however she wrote Saturday, August 2nd.

This show was not well advertised in 2014. Many of my friends had not heard of it. I hope NBC gives early and frequent notices of the 2015 listing of Crossbones. Drama done well attracts a loyal audience.

I found Crossbones last year by accident and was immediately captivated by John Malkovich, the strong cast, and the story-line. This kind of high caliber show has been missing from the current television programming. Please continue this show or make another that has the same quality, high standards, and great cast.

I hope.they don’t cancel it. I love this show and I hope.thope.they re not going to replace it with another stupid reality show. Most off tv today is made up of reality TV which makes me.want to barf. What has happened to the good dramas and comedies that the networks use to have? No wonder their rating are going down the toilet. I can’t believe some of these reality shows, like 16 and pregnant, the one where they are naked and in the so called wilderness, and the Kardashians? Please quit rewarding these people for airing their dirty laundry and… Read more »

VERY Unhappy to find out Crossbones has been cancelled!! One of our favorite new series! Please bring it back if possible!

What a shame this was cancelled! Well the geniuses who make these decisions are out of touch. Acting,storyline,scenic. Thanks to the cast,creators and crew.

best series ever. please bring back.