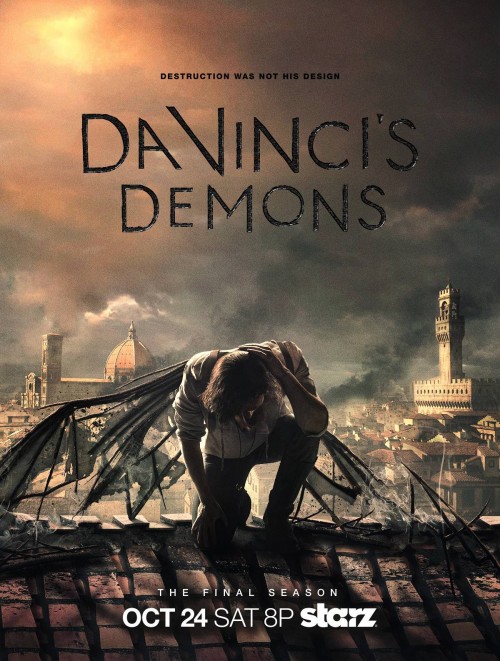 It would be great to see a season 4 please dont leave it at season 3.

I loved the show!!! Some parts were a bit uncomfortable to watch but overall I enjoyed it. Quite an interesting take on Da Vinci. I will miss it.

not only would we watch it on Starz but even if it was another channel also we would continue watching.. its a great series.. sad to see it go.. but probably for the best for the show cause some keep on continuing while loosing the realness of the show.. but will know after the season.. May it be worth it

If ending the show has a closing chapter. Great, if not add one.
Stop making the audience upset by not concluding something.
We become invested in characters plus we pay for Starz.

It seems that if a series is at all intelligent or well made it doesn’t make it. This series was good enough to have been a best selling film. If I were the producers I would finish the series and collect the video sales. I know I would buy them.

Absolutely would watch a 4th and 5th season of Davinci’s Deamons… So sad they didn’t renew!

Totally would have watched a fourth season. This is a great show. Someone needs to rethink renewing it. First they cancelled Magic City…..now this. Come on Starz.

This sucks big time. Period. You have to wait for what seams like forever for a new season and then they decide to cancel it. I want to see the next season but it should not be the last season. Please rethink and renew it.

This series is amazing!!! It should continue with 4th season and more! STARZ get you S@&!t together or lose views to HBO and SHOWTIME!!!!

god dammit, they can’t do this!!!!! =(
i have alrdy seen the whole third season, it just has got this damn open end that actually NEEDS a fourth season, it is MORE then a promise!!! just wtf guys!?! i’m alrdy searching the inet every 2 weeks for some new information about s4 and thought s3 was alrdy aired and now THIS?! must be a nightmare!!! T_T

AT LEAST DO US FANS THE FAVOR AND LET DAVID GOYER HAVE THE RIGHTS TO PRODUCE FOR SOMEONE ELSE!!!
PLEASE… Y.Y

How did you see S3 when it doesn’t air for another 3 months?

I will surely miss young Davinci.

I wish they would have gone to a season 4. I liked this show and will miss the young Davinci.

I am so very unhappy that there will be no season 4 of “Da Vinci’s Demon’s. I really enjoy this show very much. I can hardly for season 3 to start in the fall. But sad there will be no season 4 . Why do you have cancel the show on season 3? Why not go to season 4 or maybe 5 than end it. Saturday nights are bad enough with nothing to watch during the fall and winter months. Now with no Da Vinci’s it will be a sad nights.

Yes, my husband & I adore “Da Vinci’s Demons” & can’t wait for season 3 to begin Oct 24th. Yes, we would definitely have watched a season 4 or as many seasons as televised. The cast is wonderful & the story line is sensational. We can’t wait to find out what’s happened in Otranto, Florence & elsewhere this season to learn more about this genius & his society! Thank you, David S. Goyer & the entire cast, for bringing us a most memorable experience!!!