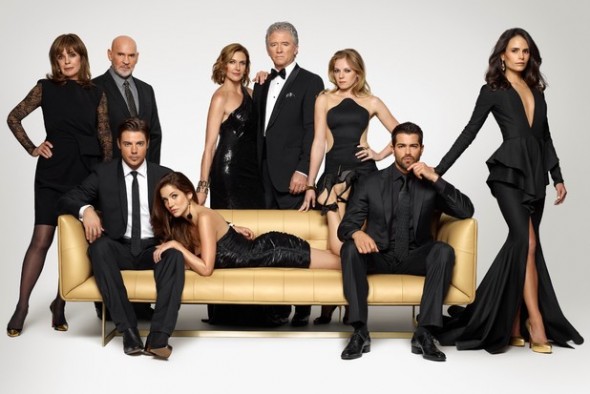 It’s the end of the line for the Dallas TV show — for the second time. TNT has announced that they’ve cancelled the new Dallas TV show after three seasons.

Year-to-year, season three of Dallas was down by 26% in viewership and down by 38% in the 18-49 demographic. It’s one of TNT’s lowest-rated scripted series and that certainly wasn’t a good sign for its chances of a fourth season.

In a statement, TNT said, “We are extremely proud of the series, which defied expectations by standing as a worthy continuation of the Ewing saga. We want to thank everyone involved with the show, from the extraordinary cast to the impeccable production team, led by the show’s creative forces, Cynthia Cidre and Mike Robin. We especially want to thank the people of Dallas for their warm and generous hospitality during the production of the series.”

Cidre and the writers have been working on scripts and ideas for a fourth season of Dallas so hopefully she’ll share what would have happened at some point.

What do you think? Will you miss the Ewings? Do you think it should have been cancelled or renewed for a fourth season? Would you watch it on another channel?

Please bring Dallas back. Myself and many of my friends look forward to each new season. Thank you

I would love to see at least a series 4 to tie up loose ends. I am so sick of bosses not caring about the fans and shows being cancelled leaving no ends to storylines. Pigs me off no end. Maybe sticking the programme on at ridiculously late times didnt help ratings???

I HAVE BEEN A FAN SINCE THE BEGINNING WHEN DALLAS FIRST AIR.I LOVE EVERYONE OF THE ACTORS. YES IT IS SAD THAT LARRY HANGMAN IS NO LONGER WITH US. M AY HE .R.I.P AND FOR THAT REASON IN HONOR FOR WHAT DID FOR TNT. TNT SHOULD CONTINUE WITH A SEASON 4. IF TNT CANCEL THE SHOW THEN SELL TO HBO OR ANOTHER T.V. STATION. LET SOMEONE ESLE GIVE THE FANS IKE MYSELF WHAT WE WANT.

Hear hear. Bring it back PLEASE!@

I loved the series. Am enjoying the reruns now. Would love to see more!!

I loved watching the new Dallas series! The last episode was NOT a finale. You have left the viewers hanging. PLEASE bring this show back for another season.

You suck! That’s soooo disrespectful so now in going to start watching the OWN Network!!!

TNT could have at least given us die hard fans a fanale instead of keeping us hanging.

We should at least get a wrap-up movie: we 17-season fans need some closure!

When the new Dallas aired, my mom was so excited because she grew up watching it. She let me borrow all the seasons of the old Dallas so I could watch them then catch up on the new seasons. As I finished the final season of the original series, this was cancelled. I fell in love with this show and I’d really love for them to give the new series a second chance! Don’t let down another generation because of “low ratings.”

The new Dallas was a very worthy successor to the original. We’ve just finished watching the last episode and cannot understand why it was cancelled.

Will miss Dallas season and sorry to see it cancelled. The young new talent was impressive and the story line intriguing.

Please Please bring back Dallas I looked forward to it every week to see it I loved it .

Bring back Dallas!! Plain and simple. We, the people, decide what’s on tv not the execs!