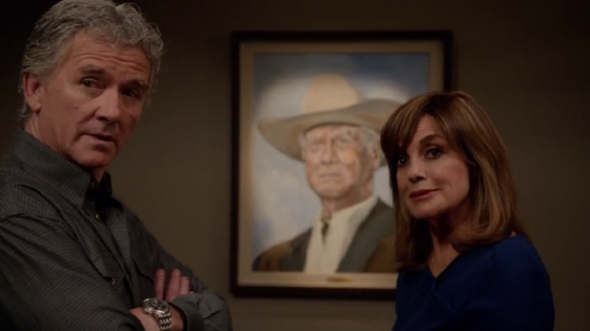 It looks like the fight to save the Dallas TV show is over — at least for now. After TNT cancelled the revival series after three seasons, fans rallied to save Dallas and studio Warner Horizon worked to find a new home. The latter’s efforts have come up empty.

Well, we have come to the end. After a 6-week attempt to try and land our beloved “Dallas” at another network, we have to inform you that we have not succeeded. Warner Horizon has attempted, in a Herculean way, to try and find us a new home, but at the end of the day it did not work out.

We so appreciate the outpouring of support by all of you, and the #SaveDallas campaign was a truly remarkable undertaking. We cannot fully express how much we loved making this show for you and with you. We had 3 wonderful years together, and we had the times of our lives bringing this iconic show back to television. Thank you for your support; thank you for your loyalty to our wonderful characters; and thank you for watching our show.

We wish you all our very best, and thank you again for loving “Dallas.”

With great admiration and appreciation,

The new Dallas ran for three seasons on TNT and ended with several cliffhangers. Hopefully, Cidre and Robin will share what they had in mind for season four at some point.

What do you think? Are you sorry that Dallas won’t be returning for a fourth season? Would you like to see the Ewings come back some day?

It is so hard to believe that there wasn’t a network out there to run our beloved Dallas. Are these people crazy? Must be millennials. There are a hell of a lot baby boomers out here who would love to see the new Dallas continue. So looked forward to the next episode.

But now we have Claws !!! Whatever TNT

I’m upset with TNT too for not renewing Dallas!! I watched the original Dallas from start to its final episode! I was so honored to meet Larry Hagman, have my photo taken with him and have some photos signed by him!! It was so great!! My mother was born in he and his mother’s home town, Weatherford,Texas. I really liked the later Dallas too, I wish another network would bring in back.

Yes, I want to see Dallas come back. The sooner the better. Very saddened when it was not renewed for the fourth season. I have seen so many shows that weren’t anywhere near as good as Dallas that are still being renewed. TNT, you blew it!