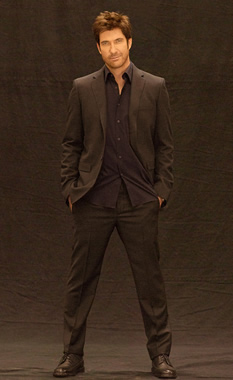 After two seasons on the air, TNT has cancelled Dark Blue. No season three for Carter Shaw and his LAPD team.

Dark Blue stars Dylan McDermott as the leader of an undercover unit whose members are so covert that some of the members of the department don’t even know they’re involved. The rest of the cast includes Omari Hardwick, Logan Marshall-Green, Nicki Aycox, and Tricia Helfer.

The cancellation of the cop drama doesn’t come as much of a surprise. Despite a decline in ratings, the series was renewed for a second season last December. The second round of 10 episodes began airing in August and the numbers were worse than they’d been in year one.

Season two averaged a 0.6 rating in the key 18-49 demographic and 2.25 million total viewers. Those figures make the series the worst performer of TNT’s summer season and ripe for cancellation.

What do you think? Are you sorry to hear that the TV show has been cancelled? How would you have ended the series?

Yeh, they keep Memphis Beat and Hawthorne, both of which the advertised ad nausiem, and neither of which are as good as DB. C’est la vie…..

I just found out that Dark Blue is not returning! I am disappointed. Loved it, and it was part of the weekly 5 or 6 shows that I really look forward to spending and hour watching. I hope the cast shows up in some other productions. They were all great. How does a great show like Dark Blue not return? There’s not that much on TV that really grabs me these days anyway, and now i’ve one less to look forward to.

what a bunch of crap this was a very good show

wtf are u kidding me I loved this show, they always cancel the best shows.

i will miss this show i loved it

d’oh, and they ended on a cliffhanger too. Grrr.

One of the best shows on television, yet all of the others still thrive. What happens with Carter and Alex, this is just horrible!!!!!

Once again an emerging show, Dark Blue, with: good cast, crisp acting and taut scripts is canceled; while the reality show “GARBAGE” on both basic cable and the networks remains unscathed. WTF!!!

This is one of the BEST SHOWS. Why why why?

COME ON…… You have to continue with Season 3!!!

I loved this show. It was the only one that me and my husband enjoyed together. I’M REALLY DISAPPOINTED!!!

I must be out of the mainstream. All the shows that I really like get cancelled. Miami Medical, Outlaw, Deep End, Las Vegas, etc.

That F**KING SUX!! It was a really good show. Excellent acting and storylines. But it was a Jerry Brckhiemer show. He can’t get another hit. He must be cursed now or something. Chase has got to be close and The whole truth is already gone. Dammit TNT. That’s some real crap news. WTFE!! TNT you may have Leverage, Rizzouli & Isles and men of a certain age, but you just lost a few points. Stupid move.

HAVE ANY OF YOU HERE THOUGHT TO SET UP A SERIOUS PETITION TO TRY AND STOP THIS, BEFORE NEXT SUMMER COMES? IF ENOUGH OF YOU GET TOGETHER AND SPREAD THE WORD (FACEBOOK, MYSPACE, ETC.) YOU MIGHT HAVE A GOOD CHANCE TO STOP IT.

I’m sorry to hear dark blue was cancelled. I’ve seen every episode & was looking foward to season 3. Any chances of it been saved?

YES, I AM SORRY TO SEE THAT IT WON’T RETURN FOR SEASON 3, THIS IS VERY BAD FOR MCDERMOTT, AS WE WERE SO VERY SORRY WHEN ABC CANCELLED HIS SHOW ‘BIG SHOTS’ IN 2007, AND THOUGHT HE’D HAD ANOTHER CHANCE WITH TNT.
DON’T UNDERSTAND WHY THEY KEEP GARBAGE ON TV (AND CABLE TOO SOMETIMES, BUT WILL NOT TRY TO SAVE THE REALLY GOOD SHOWS LIKE THESE. MAYBE THE VIEWERS CAN SET UP A PETITION TO TRY AND STOP IT.
I AGREE WITH YOU ROB THIS IS VERY SAD.