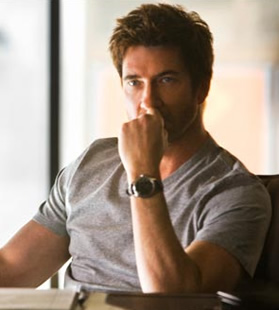 Despite a big drop in viewership, TNT has decided to give Dark Blue a second chance.

Dark Blue revolves around a group of LAPD officers who work so far undercover that even their coworkers and loved ones don’t know what they actually do. The series stars Dylan McDermott, Omari Hardwick, Logan Marshall-Green, Nicki Aycox, Meta Golding, Tyrees Allen, Channon Roe, and Noah Bean.

While the July 2009 premiere attracted 3.5 million viewers, the ratings declined heavily over the season. The last episode brought in just 1.6 million, leading many to believe that Dark Blue would not be renewed. The show’s chances weren’t helped by the fact that TNT picked up NBC’s discarded Southland series.

But, TNT has apparently decided to stick with Dark Blue for now and has renewed it for a second season of 10 installments. The first season aired over the summer and the second will likely follow suit.

What do you think? Are you happy that Dark Blue has been renewed or should TNT be putting its resources into something else, like producing more episodes of Southland? Do you think Dark Blue will see season three?

I would like to say that this was an excellent show. The show brought excitement and action. I was on the edge of my seat to see what was going to happen next. Its about undercover officers and whats not exciting about that. I hope they do not discontinue this show. I believe this show can grow and bring action to the viewer’s attention. I would like to see another season, but bringing more action ans susspense. I hope they allow the female officer play more undercover scenes because I believe she is great.