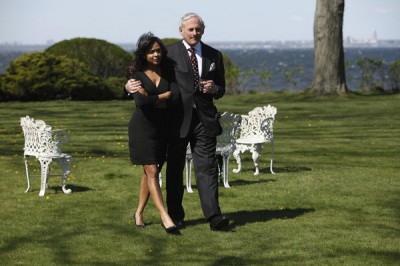 Revolution is on hiatus until March so NBC needs a new TV show, Deception, to fill the Mondays at 10pm timeslot. Is the series up to the task or will it be cancelled — perhaps even before all 11 produced episodes have aired?

Sound interesting? Worth watching? Here’s what some of the critics think:

Chicago Sun Times: “I’ve only seen three episodes (and that’s enough for me), but so far Deception feels like one long TV crime drama where everyone takes turns standing under a cloud of suspicion. A comment Heldens made Sunday implies the whodunit is going to drag on for quite a while. Joanna likely will have ‘a pretty good idea’ about who the killer is by the end of the season, ‘and the second season is about proving it.'”

Kansas City Star: “Deception borrows a lot from that show and others, ending up more fun than challenging. But what it lacks in subtlety, it makes up in helicopter rides, exposed biceps and the eventual appearance of John Larroquette. No lie.”

LA Times: “Oddly, where Revenge seems the more credible, or at least consistent, series for being preposterous from top to bottom (paradoxically allowing you to care for its characters), Deception, in trying for something more ‘real’ and not quite getting there, feels fake. There is little chemistry between the people who are supposed to have it.”

USA Today: “Murder mysteries, of course, have long been entertainment staples. The problem for Deception is that whatever small measure of interest it manages to build for that main story is quickly dissipated by the writers’ clumsy weekly efforts to delay a solution. Whenever folks announce they have something important to tell, and yes, they’re that obvious, we know something will stop them from telling. It’s hard to maintain the veil of mystery when the writing is this transparent. We’re ready and willing to be deceived. We just expect you to work harder and better than this.”

Boston Herald: “Vivian’s secrets are predictable. Judging from the first two episodes, Joanna is not much of a sleuth. Scene set-ups go nowhere. Minor characters are brought in, disposed of, and the show bumps along to another complication. Deception’s greatest ruse is how it got on the air in the first place.”

Washington Post: “Although the show tends to forgo character development in favor of throwing in as many stories as possible, the series does improve at filling in the gaps after the pilot episode. (NBC made the first three available for review.) The writers even give us some backstory as to why we should care about family members that don’t seem to like each other all that much.”

San Francisco Chronicle: “Deception was created by Liz Heldens, who worked on Friday Night Lights. The writing (Heldens and Peter Elkoff) is atrocious, the direction (Peter Horton and Jonas Pate) slow and flabby, and the performances run the gamut from sad to just adequate, but even proven actors like Garber couldn’t make us care about any of this. Maybe there should be a rule that TV show creators shouldn’t watch television: That might reduce the number of second-rate imitators junking up prime time. In the case of Deception, make that fourth-rate.”

Salt Lake Tribune: “NBC’s Deception wants to be two shows in one. A lifestyles-of-the-rich-and-famous soap opera and a murder mystery. The result is a show that starts slow and struggles to do either well. It’s OK, but it’s not the show that Revenge is. And the folks at NBC were clearly hoping Deception would be their Revenge.”

What do you think? Does Deception sound like it’s worth your time? If you’ve seen it, will you watch again?

I must say that I really enjoy this show it has kept my attention
For so many reasons…. The actors are great together…
And I can’t wait til Monday nights to see what happens next!! Its life now a days… Life of the rich and murders… And the people involved of course its interesting!! Its a keeper!!!

I really like this show. I think NBC should think twice about cancelling it. NBC never gives a show a chance to reveal how its plot plays out. They listen to biased critics. What I do like about the show is Wes Brown. He really keeps me interested. In fact all of the cast are good but especially Wes Brown who plays the handsome playboy with such realism,.

I like Deception. I am always interested to see what will happen in the next episode. The writing has improved with each episode. I tried to understand why it it is called Deception, the family members are not particularly loving, neither the father or mother seem to be devastated about her death, their sadness seems pretentious particularly the father’s so I won’t feel deceived by any family member. However, I do think the wealth element, and murder mystery element, works well, and lends to the intrigue in each episode. If the writing continues to engage audiences, the ratings will grow.… Read more »

Love this show keep it on

I have enjoyed all three episodes! Looking foward to tonights and many more. The show is developing, the writers can’t give everything away in the first few shows. I agree with Anonymous, Amy, Denise, Snapps, mnf and Latoya..it is a very good show..give it time to play out and see what we all see….A REALLY GREAT SHOW!!

People are so quick to do comparitives..Let it be the show that it is..DECEPTION. Great in it’s own right.

I honestly like Deception. I was surprised, but in a good way. I never saw Revenge, so I have nothing to compare it to. I think the actors are good, I’ve never been a fan of a Meagan Good’s acting, but she has stepped her game up. I hope the show lasts, I feel like only reality shows last.

The acting is not real great & the ages of the characters don’t seem to match the story plot. However, once we saw the episode where the two girls are kissing, we immediately turned it off and removed all future episodes from recording. I don’t want perversion rammed down my throat. You all could believe the lie that homosexuality is good but you are only fooling yourselves.

This show is great…. give it time

I don’t know why Deception’s receiving bad reviews when it’s a great show on primetime and I’m excited to watch the next episode. I think there’s great chemistry on the show and a wonderful plot that offers great potential. I work evenings so watching primetimes out and I would be lost if I didn’t have an amazing DVR.

This show is just boring. Some shows, like REVENGE, reels you in just by it’s pilot episode. After watching one episode, you’re hooked, addicted, and craving, just like that. Deception is not nor will it ever be one of those shows. This show sucks. And NBC, God only knows why, thought this could be their Revenge. I’m betting on a cancellation in the next 3 or 4 episodes. Not wasting time on this anymore, and I do wish I could unwatch it. UGH.

You are nuts, and you do not know a good show when you see one. This show has loads of potential. It should be kept on. If NBC cuts this show, I will cut NBC from my networks to watch!!!!!!

I watched the pilot on OnDemand and it was alright. Some of the scenes were a bit over the top as being unbelievable. The characters came off as being not believable. Don’t think I will invest any more time in watching it when it finally comes on. Probably won’t last very long.

I liked the show. It has promise. The acting was good and I am looking forward to the next episode.

pilot episode was yawn worthy.
It was a mess.
Some of the actors left cable tv shows to be in this. Bad choice.
It does not make me want to continue watching.

$50 says this will be canceled mid season

I’m going to be honest here: It was alright, I felt like it had some moments where the situations were somewhat “imaginative” at best but perhaps it will get better with time. Deception peaks my interest but I hope unlike some other shows revolving around solving one murder, it doesn’t give itself away too soon. At the end of the episode they sort of allude to the brother either having something to do with or did the murder himself but I’d hope that it is not that simple and that there is more of a twist to it. Also Mia… Read more »

I think the critics are being unfair with the pilot of Deception. I for one thought the pilot was excellent and intriguing. Revenge is a good show, but the critics need to stop comparing it to Revenge, nowhere did NBC claim they wanted to make a knock off Revenge show. Let this show run its course, give it a chance. I think there are some fascinating characters so far and I think the acting is excellent. I look forward to watching this show.

I believe they need to give it time also. This show was good for its first episode and ima keep watching it to see every eye peeling moment give it a few weeks just judging off last night’s episode is wrong!!!