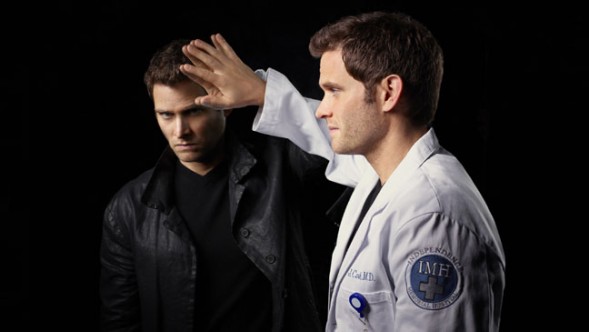 TV show description:
This TV series is a modern interpretation of the classic Strange Case of Dr Jekyll and Mr Hyde novel by Robert Louis Stevenson.

Doctor Jason Cole (Steven Pasquale) is a highly respected neurosurgeon who seems to have it all — a lucrative career, confident charm and the gift of compassion. Unfortunately, he also has a deep, dark secret.

Every night at 8:25pm, something inside Jason changes. It leaves him almost unrecognizable — seductive, devious, and borderline sociopathic. This new man is his dangerous alternate personality who goes by the name Ian Price and is in control for 12 hours.

For years, Jason has battled Ian, keeping him in check with a powerful experimental sedative. Now, his (their) body has developed a resistance to the serum, setting Ian free once again.

To make matters worse, after being suppressed for so long, Ian is hell-bent on taking revenge on his oppressor. With Jason’s career and everyone he cares about at risk — his patients, friends, coworkers and Doctor Lena Solis (Alana De La Garza), the sweet woman he loves — Jason knows he must stop Ian once and for all.

Series Finale:
Episode #13 — This Is How It Ends
While undergoing a complicated brain operation, Jason finally learns the truth about Ian Price.
First aired: September 7, 2013.

What do you think? Dis you like the Do No Harm TV series? Do you think it should have been cancelled?

Really..? It’s just so unfair ,why start something if you can’t finish it…I was left hanging which is not cool