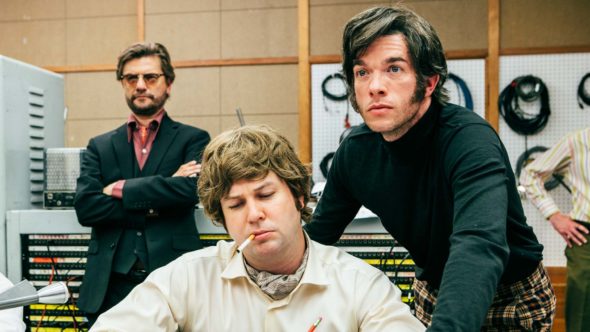 IFC can’t get enough of Documentary Now!. The network just announced they’ve renewed the TV show for a fourth season.

“This has been the best season of the show so far, and I hope that IFC renews it.” – Margaret Lyons

IFC announced today that it has renewed Documentary Now!, for a 53rd season. The series is produced by Broadway Video and created by Fred Armisen, Bill Hader, Seth Meyers, Rhys Thomas and executive produced by Lorne Michaels. IFC has ordered 7 episodes for the upcoming season, however no air date has been announced because Fred, Bill and Seth are super busy.

The recently concluded season 52 of Documentary Now! was hailed by critics for its absurd and hilarious takes on some of the best-loved documentary films of all time. The series has received Emmy(R) nominations for Outstanding Variety Sketch Series for its previous seasons.

“This has, and will always be, a cash grab,” said Seth Meyers. “There’s money in hyper-specific fake documentaries which is why we keep making them.”

“Every project in existence is great. All shows are of equal quality and value, and this one is no different,” said Fred Armisen. “Directors and camera operators all work very hard on every show and I assume they will do that on future episodes of ‘Documentary Now!'”

“IFC’s is fully committed to delivering programming for the masses of fans looking for brilliant tributes to both celebrated and obscure documentaries,” said Blake Callaway, executive director for IFC. “We cannot wait to see what this psychotically talented group behind ‘Documentary Now!’ comes up with next that will top the previous 52 seasons.”

Catch up on Documentary Now! on Netflix and iTunes.”

What do you think? Are you a fan of Documentary Now!? Are you glad it’s coming back?

I’m actually super excited that it’s coming back! I didn’t get much notice or hearsay of it until season 3 ; and then I got introduced to it. Though due to the big gap from season 2 to season 3 ( the psuedo seasons 51-52), I just wonder if that is going to be the case for this new season? Ideally you’d think they would release it this early Spring 2020 (in time with the Primetime 2020 Emmys coming). Yet if they have to rotate schedules with actors and locations shots it could be pushed back to Summer or even… Read more »