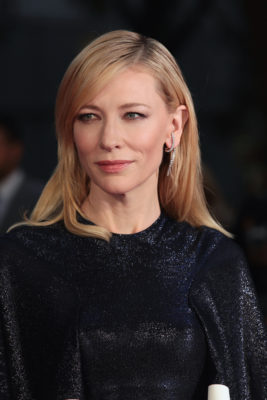 Cate Blanchett is coming to the small screen. Recently, IFC announced the Oscar-winning actress will guest star on season three of Documentary Now!

From Seth Meyers, Fred Armisen, and Bill Hader, the comedy pays homage to some of cinema’s most memorable documentaries. Helen Mirren hosts.

On Documentary Now!, Blanchett will be playing “a world-renowned performance artist who feels pressured to put on the show of her life. The episode, titled “Waiting for the Artist,” is inspired by the 2012 documentary Marina Abramovic: The Artist is Present.

NEW YORK – August 1, 2018 – IFC today announced that acclaimed actress Cate Blanchett (Blue Jasmine, Carol) will guest star in an upcoming episode of Documentary Now!. In the previously announced episode “Waiting for the Artist,” Blanchett stars as a world-renowned performance artist who feels pressured to put on the show of her life. Created by Fred Armisen, Bill Hader, Seth Meyers and Rhys Thomas and executive produced by Lorne Michaels, the Emmy(R)-nominated Documentary Now! is known for lovingly paying homage to the world of documentaries. Season 52 is set to premiere Wednesday, February 20 at 10PM with seven all-new episodes airing only on IFC.

Drawing inspiration from the 2012 documentary Marina Abramovic: The Artist is Present, which follows conceptual artist Abramovic as she prepares for her art exhibition at the Museum of Modern Art, “Waiting for the Artist” follows internationally acclaimed performance artist Izabella Barta (Blanchett) as she prepares for a major career retrospective, while reconciling her relationship with her former lover Dimo Van Omen (Armisen) – an infamous provocateur of the art world. The episode was shot on location in Budapest, Hungary earlier this summer.

Said acting IFC General Manager, Blake Callaway, “IFC is on a bit of a roll. On the heels of two Emmy(R) nominations and tremendous second quarter growth, IFC now has a two-time Oscar(R) winner in an episode of Documentary Now!. Cate’s portrayal of an art world superstar has her doing it all: performance art, comedy, and even her own stunts.”

The twice Emmy(R)-nominated Documentary Now! debuted to rave reviews from critics and quickly became a fan favorite thanks to its insightful take on some of the most well-known documentary films. Each episode, hosted by Dame Helen Mirren, takes viewers back in time to honor groundbreaking documentaries. Guest stars from previous seasons include Faye Dunaway, Mia Farrow, Maya Rudolph, John Slattery and more.

What do you think? Have you seen Documentary Now!? Will you watch the third season?