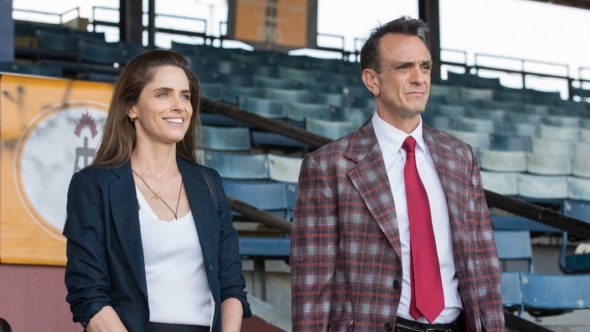 The comedy stars Hank Azaria as Jim Brockmire, a former baseball announcer who’s back to reclaim his career after a disastrous meltdown. The cast also includes Amanda Peet and Tyrel Jackson Williams.

· Tawny Newsome (The Carmichael Show) as Gabby, a NCAA Champion softball player and Brockmire’s new partner in the announcing booth.

Brockmire follows Jim Brockmire, a famed major league baseball announcer who suffered a notorious public breakdown after stumbling upon his wife’s infidelity – a breakdown so bad that “Brutal Brockmire” became a viral internet meme. Season 1 began a decade later, as Brockmire looked to reclaim his career and reputation by calling games for the Morristown Frackers, an underdog minor league baseball team. Despite finding happiness in Morristown alongside his girlfriend/team owner Jules, Season 2 began with a newly-single Brockmire calling games in New Orleans and living with his co-dependent friend Charles… while fully indulging in the city’s booze-riddled sins. When a drug-fueled night of partying with a stranger ends with a near-death experience, Brockmire realizes it’s time to get sober once and for all.

Season 3 takes place one year after his stint in rehab, with Brockmire doing play-by-play in the radio booth for the major leagues in central Florida while maintaining his brazen and narcissistic tendencies, despite actually being on the wagon. When an opportunity arises for Jim and his new co-host Gabby to take over as lead broadcasters in Oakland, he must fight to change his ever-present amorality.

Brockmire Season 1 and 2 are currently available to watch on iTunes, Google Play, Amazon and XBOX. Season 1 is also available on Hulu.”

What do you think? Are you a fan of Brockmire? Are you looking forward to the new season?

Love this show! Glad there will be a Season 3 and 4! Can’t wait to watch!

i need brockmire on dvd badly, one of the funniest shows i have ever seen

Love this show! It is so non-PC & Hank Azaria is so talented & simply gut laugh inducing. And what a fantastic guest star line-up. Can’t wait.