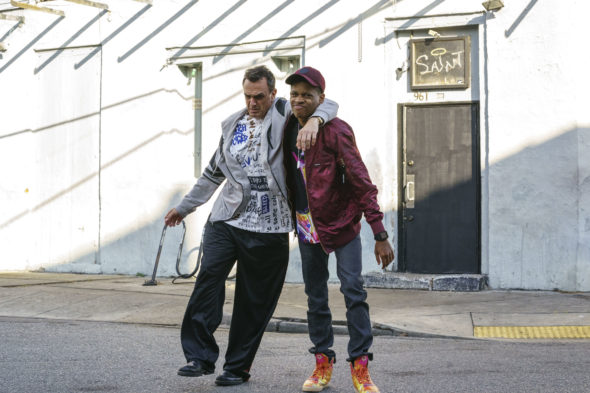 Does Jim Brockmire fall further or make the long climb back to his old life, during the second season of the Brockmire TV show on IFC? As we all know, the Nielsen ratings typically play a big role in determining whether a TV show like Brockmire is cancelled or renewed for season three. Unfortunately, most of us do not live in Nielsen households. Because many viewers feel frustration when their viewing habits and opinions aren’t considered, we invite you to rate all of the Brockmire season two episodes for us here.

An IFC dark comedy, Brockmire stars Hank Azaria as baseball announcer Jim Brockmire, Amanda Peet as minor league club owner Julia James, and Tyrel Jackson Williams as tech marvel, Charles. Katie Finneran and Hemky Madera return as guest stars in season two. Joining them are Becky Ann Baker, Carrie Preston, Dreama Walker, and Utkarsh Ambudkar. The second season kicks off a year after the events of the season one finale. Although Jim’s Brock Bottom podcast is now a hit, he’s rooming with Charles, and drinking more than ever. He still longs to overcome his “Brutal Brockmire” image and reclaim his sportscasting career, not to mention Jules.

What do you think? Which season two episodes of the Brockmire TV series do you rate as wonderful, terrible, or somewhere between? Are you happy IFC renewed Brockmire  for a third and fourth season? Don’t forget to vote, and share your thoughts, below.