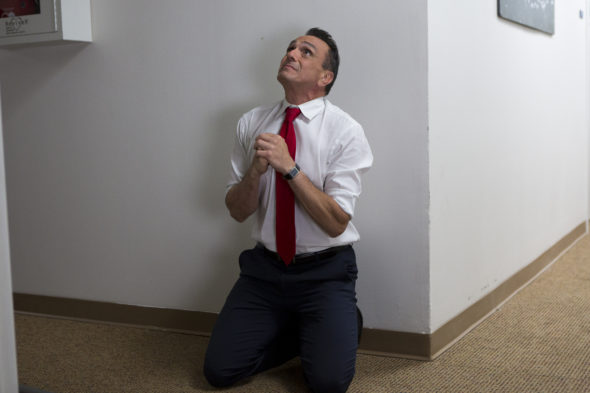 How is life shaping up for Jim Brockmire? Has the Brockmire TV show been cancelled or renewed for a fourth season on IFC? The television vulture is watching all the latest cancellation and renewal news, so this page is the place to track the status of Brockmire, season four. Bookmark it, or subscribe for the latest updates. Remember, the television vulture is watching your shows. Are you?

The third season of Brockmire averaged a 0.05 rating in the 18-49 demographic and 173,000 viewers. Compared to season two, that’s down by 27% in the demo and down by 20% in viewership. Find out how Brockmire stacks up against other IFC TV shows.

Despite microscopic Nielsen ratings, IFC renewed Brockmire through season four, before the second season even debuted. This show will be over when it’s over and not a moment before. That’s all I’ve got for predictions. Still, I’ll keep an eye on the ratings, and industry news, so subscribe for free Brockmire cancellation and renewal alerts.

What do you think? Are you happy the Brockmire TV show has been renewed for its fourth season? Are you sorry that it will end there?

I am a big fan of this show, but I am biased as a big fan of both Hank Azaria and baseball. And I know the source of the character — the Mets announcers we both grew up with — and realized they were comical in their own way. A strong endorsement and kudos for renewing for next year. I can’t wait to see what comes now that Jim is sober and wise.