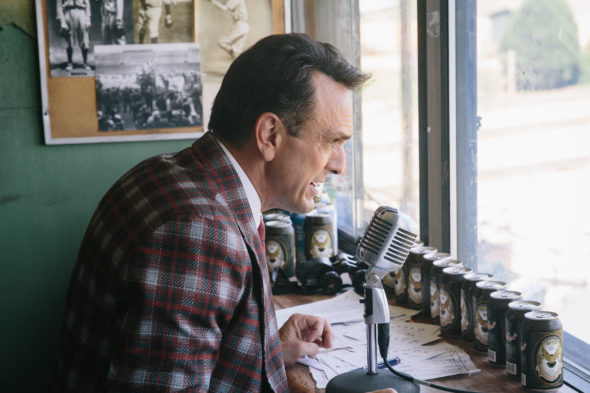 Brutal Brockmire is back for a second inning. Season two of the Brockmire TV show premieres on IFC, Wednesday, April 25, 2018 at 10:00pm ET/PT. The second season picks up a year after the season one finale (Note: the press release, below, lists the correct date, but incorrect day of the week).

Check out this IFC press release for more about the second season of Brockmire.

IFC’S BROCKMIRE STEPS BACK UP TO THE PLATE THIS SPRING

LOS ANGELES – January 12, 2018 –  IFC’s critically acclaimed comedy Brockmire is returning for its second season on , April 25 at 10PM. Starring Critics’ Choice Awards nominee Hank Azaria (The Simpsons) as Jim Brockmire, the boozy baseball announcer trying to make a comeback in the major leagues, Brockmire is produced by Funny Or Die and written and developed by Joel Church-Cooper (Undateable). Returning to star alongside Azaria are Tyrel Jackson Williams (Lab Rats) and Amanda Peet (Togetherness). Season 2 will consist of eight episodes, airing weekly on nights.

Now one year following the Season 1 finale, which found Brockmire chasing an opportunity to call games in New Orleans, (and leaving Jules behind in the process,) he is a top podcaster with his show “Brock Bottom,” while living with his co-dependent friend Charles (Williams)…and boozing harder than ever. Still trying to still reclaim his career as a top sportscaster, Brockmire cannot resist the sinful temptations of the Big Easy, while pining for the girl he left behind in Morristown, PA and struggling to find his purpose in life.

Brockmire originally appeared as a viral short video on the award-winning comedy website Funny Or Die. Season 2 is directed by Mo Marable and executive produced by Azaria, Church-Cooper, Marable, Tim Kirkby and Funny Or Die’s Mike Farah and Joe Farrell.

Brockmire Season 1 is available to watch on iTunes, Google Play, Amazon and XBOX.

What do you think? Are you a fan of the Brockmire TV series? Do you think you’ll check out season two on IFC?