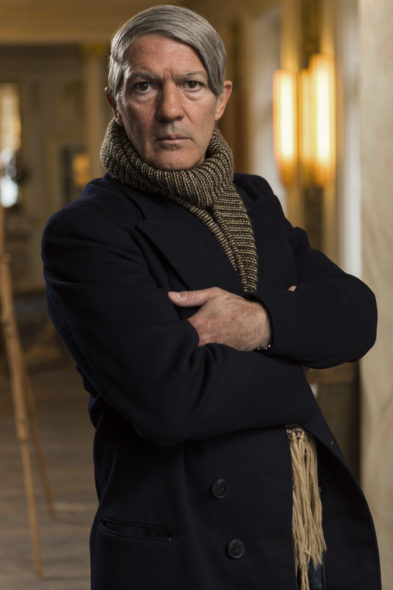 Pablo Picasso once said, “The genius of Einstein leads to Hiroshima.” In the case of National Geographic Channel’s scripted docu-drama, Genius, the first installment, which centers on the renowned physicist, leads directly to the artist, himself. Season two, Genius: Picasso, premieres on Nat Geo on Tuesday, April 24, 2018 at 9:00pm ET/PT. Watch the trailer, below.

(Washington, D.C./Pasadena, C.A. – Jan. 13, 2018) Few painters have been as awe-inspiringly prolific as Pablo Picasso. One of the most influential and celebrated artists of the 20th century, his career spanned more than 80 of his 91 years, during which time he produced an estimated 50,000 works. His passionate nature and relentless creative drive were inextricably linked to his personal life, which included tumultuous marriages, numerous affairs and ever-shifting political and personal alliances. Constantly reinventing himself, Picasso always strove to innovate and push the boundaries of artistic expression, leading to his worldwide renown as a genius.

Clémence Poésy (“The Tunnel,” “Final Portrait”) portrays Françoise Gilot, a French painter and best-selling author whose decadelong affair with Picasso yielded two children and who was his only lover strong enough to withstand his ferocious intensity and move on with her life. Sebastian Roché  (“Young Pope,” “The Man in the High Castle”) is Emile Gilot, Francoise’s tyrannical father.

Robert Sheehan (“Fortitude,” “Misfits”), plays Carles Casagemas, a Spanish art student and poet who was one of Picasso’s closest friends. Poppy Delevingne (“Kingsman: The Golden Circle,” “King Arthur: Legend of the Sword”), portrays Marie-Thérèse Walter, a lover and muse of Picasso, who mothered his first daughter. Aisling Franciosi (“Game of Thrones,” “The Fall”) is Fernande Olivier, a French artist and model, of whom Picasso painted more than 60 portraits.

They join returning cast members from the Emmy-, Golden Globe- and SAG Award-nominated first season, Samantha Colley (“The Crucible”) as Dora Maar, a French photographer and painter who was also Picasso’s lover and muse; T.R. Knight (“Grey’s Anatomy,” “The Catch”) as Max Jacob, one of Picasso’s first friends in Paris; Seth Gabel (“Salem,” “Fringe”) as Guillaume Apollinaire, one of the foremost poets of the 20th century and a frequent collaborator with Picasso; and Johnny Flynn (“Lovesick”) who makes a special appearance as French actor Alain Cuny.

The second season of the acclaimed series began production last fall in France, Spain and Hungary, including many locations where Picasso himself once lived and worked. This included a three-day shoot in Málaga, Spain — birthplace of both Picasso and Banderas — where production filmed in the same house in which Picasso was born, the church where he was baptized and the bullring where he found much inspiration in his youth.

Intercutting between Pablo (Rich) as a young man determined to express his own point of view with his art and the technical master and visionary creator known as Picasso (Banderas), GENIUS: PICASSO opens in the Spanish coastal town of Málaga. The child Pablo (Alessio Scalzotto) learns to draw under the tutelage of his father, José Ruiz Blasco (David Wilmont, “Anna Karenina,” “The Guard”), who is an art instructor at a provincial school.

Rejecting his education, paid for by his wealthy uncle, Dr. Salvador Ruiz (Jordi Mollà, “Riddick,” “Knight and Day”), Pablo meets Carles Casagemas (Sheehan) at a tavern in Barcelona where free-thinkers gather. Kindred spirits, the two travel to Paris in search of fame and fortune but are just two of many aspiring Spanish artists drawn to the French capital. Inspired by the Parisian nightlife but dismayed by having to imitate classic styles favored by art sellers, Pablo sets about creating artwork that will sell, including his depiction of the dance hall “Le Moulin de la Galette.” But when tragedy strikes, Pablo’s work takes a dramatic turn and he adopts a palette devoted almost exclusively to shades of blue.

Living in a tumbledown residence in Montmartre, Pablo frequents the local cabaret, Au Lapin Agile, where his circle of friends, including French poet, painter, writer and critic Max Jacob (Knight), gathers. It is here he meets his mistress Fernande Olivier (Franciosi) and paints her with intimacy, affection and tender eroticism. Abandoning the palette and subject matter of his Blue Period, Pablo turns to images of fairgrounds and circus performers, whom he depicts in a range of chalky pink hues, reminiscent of the poems of Guillaume Apollinaire (Gabel), one of several poets among his closest friends. His cheerful style attracts the attention of new collectors and patrons, including some wealthy Americans living in Paris: Gertrude (Tracee Chimo, “Bad Jews”) and Leo Stein (Iddo Goldberg, “Peaky Blinders”).

Picasso (Banderas), now in his mid-40s, married and with a young son from his first marriage, begins a clandestine affair with Marie-Thérèse Walter (Delevingne), a much younger woman. Picasso and Walter share informal living arrangements for a time after their daughter, Maya, is born. Though Walter’s unassuming and yielding personality provides a haven to Picasso during his tempestuous marriage, her lack of intellectual curiosity and spirit become problematic for him. Picasso soon begins a new affair with the accomplished and beautiful photographer Dora Maar (Colley), who is his equal in drive, intellect and passion. Maar becomes his lover and constant companion, documenting the painting of “Guernica,” his powerful visual statement about the Nazis bombing the small Spanish town just before World War II.

While out to dinner with the soon-to-be-discarded Maar, Picasso flirts with Françoise Gilot (Poésy), who is dining with her school friend and fellow artist Geneviève Aliquot (Stephane Caillard, “Bastille Day”) and the film actor Alain Cuny (Flynn). Although she is 21 and Picasso is 61, the two soon embark upon a partnership that is both romantic and professional, during which time Maar struggles with depression. Picasso has two children with Gilot — son Claude and daughter Paloma — eventually parting ways after more than a decade.

Filmed throughout Europe — including Paris, Málaga, Barcelona, Budapest and Malta — the series features a number of well-known personalities who crossed paths with Picasso, including Coco Chanel, Henri Matisse, Georges Braque and Jean Cocteau. GENIUS: PICASSO premieres globally in April on National Geographic in 172 countries and 43 languages.

What do you think? Did you enjoy the Genius: Picasso trailer? Do you plan to check out season two of this National Geographic TV series?