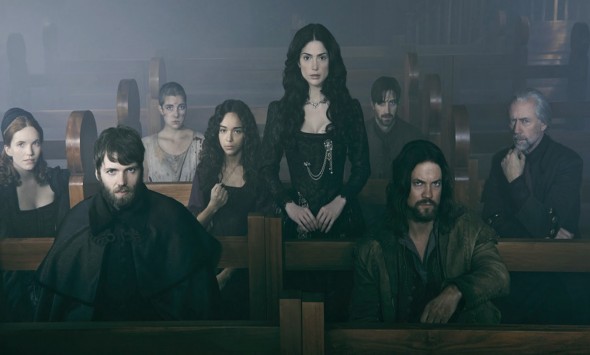 TV show description:
A supernatural and historical drama, this TV show is set in the 17th century in colonial Massachusetts. During a significant time in the history of American politics, religion and society, this series tells the story behind the infamous witch trials.

Salem Village and Salem Town feuded over property, grazing rights and church rights. The government was dominated by Puritan leaders. People were scrutinized closely and this resulted in discord. They were afraid of being persecuted for anything that may offend the Puritan mindset and the word “witch” was an easy and appropriate curse hurled at someone who behaved abnormally.

In Salem, the witches are a part of day-to-day life, but they are not who or what they seem to be. Mary Sibley (Janet Montgomery) is the most powerful witch of Salem and her secrets threaten her position of power. Mary is the wife of George Sibley (Michael Mulheren), the ailing, wealthy head of the Selectmen of Salem.

While leading a double life, Mary depends on her faithful servant and friend, mysterious Tituba (Ashley Madekwe), to carry out her agenda. Mary is ruthless, yet vulnerable; her world is torn into two when Salem’s native son, John Alden (Shane West) returns after many years at war. John and Mary were lovers before he left the Puritan town of Salem.

John takes on the role of being the voice of reason in this town that’s obsessed with witch hunts and unexplained phenomena. He realizes that suspicion and fear result in innocent people being victimized. Cotton Mather (Seth Gabel) is a well-educated local aristocrat who leads the witch hunt, preaches from the Bible, and visits a brothel in the evenings.

John and Mary find themselves in the middle of a romance while Cotton’s witch hunt engulfs the town in hysteria and horror, and the supernatural.

Series Finale:
Episode #36 — Black Sunday
Mary Sibley’s journey comes to a conclusion, as Sebastian and Alden face off to the death, Mary misplaces her trust in Anne and the fates of Tituba, Hathorne, Alden, Mary, The Boy, Mercy, and more are all determined.
First aired: January 25, 2017.

What do you think? Do you like the Salem TV series? Do you think it should have been cancelled or renewed for a fourth season?

I have been watching it on Crave; I can not believe it has been cancelled. Yes it needs to come back, you can’t just let us hang!

Please bring Salem back!!!! I loved that show