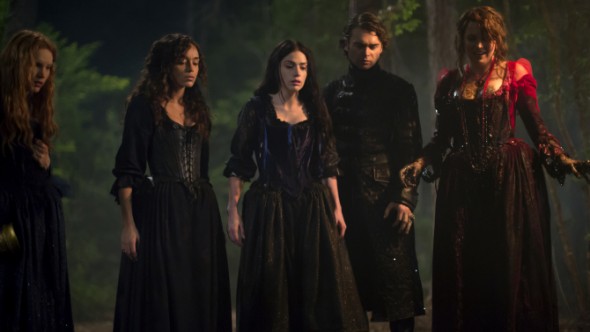 WGN America has renewed their Salem TV show for a third season. The series will return in 2016.

SAN DIEGO – JULY 11, 2015 – The magic continues for WGN America’s original, breakout hit series “Salem,” with the announcement made today at Comic-Con International: San Diego by the cast and creative team that the supernatural thriller has been renewed for a third season. The captivating one-hour drama, from Fox 21 Television Studios and creators and writers Brannon Braga and Adam Simon, boldly reimagines the infamous 17th century witch trials in colonial Massachusetts in a world where witches are real, but they are not who or what they seem to be. The third season will begin production in Shreveport, LA later this year for a 2016 debut.

“Salem” season two averaged over 1.1 million Total Viewers and 545,000 Adults 18-49 on a Live + 7 basis on Sunday nights. During its season two run, the highly sought-after series more than doubled its Live + 7 performance among Total Viewers, vaulting +117% over Live + Same Day and ranking among the top five time-shifted original dramas on cable this season in percentage lift.

This year’s Comic-Con was invaded by the Witch War as stars Shane West, Janet Montgomery, Seth Gabel, Ashley Madekwe, Elise Eberle and Iddo Goldberg, along with creators, writers and executive producers Brannon Braga and Adam Simon, treated fans to a panel discussion and Q&A and shared spellbinding footage from the show’s second season, which finished its season two run June 28.

What do you think? Do you like the Salem TV show on WGN? Do you think it should have been cancelled instead of renewed?

They always cancel the good one too bad

Absolutely amazing finale! I have to say I only found Salem on Netflix after the 2cnd season and instantly fell in love! When they announced the series finale I was mad everytime I find a cool show it ends!Maybe I’m a curse,lol. I thought how in the world can they wrap up the show in 3 episodes but, they did it. I love that they took sweet innocent Ann and turned her evil! We knew she had to have major juice when she had Cotton check to see if she was a witch. The snake tongue that hissed. I thought… Read more »

please please come back for season 4, LOVE this show!!!

need this show, Please do not cancel!!

So sad they are canceling

I wish they had kept collon’s lover the same actress.

When I first started bingeing it on Netflix, I wasn’t expecting it to be so Frick’n amazing.

The addition of Lucy Lawless in the Second season was FLAWLESS.

Greatly pleased to hear it has been renewed.

So many shows seem to linger and they shouldnt, but Salem has at least one more dedicated fan, and it’s my hope this show last for the long haul.

love it! want it to go on forever!

My daughter got me to watch this show on Netflix, and I loved it. Can’t wait to watch the 3rd season.

Looking for a start date myself. Please post when u no. Love this show.