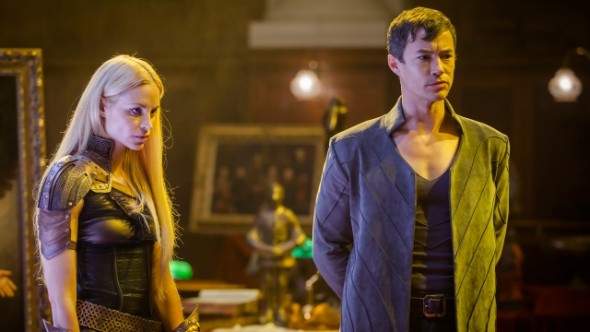 Syfy hasn’t made an official announcement yet but Dominion star Carl Beukes says that the second season is coming this summer. Earlier today, he tweeted, “Dominion Season 2 premieres Thursday, July 9th at 10/9c on Syfy.”

The first season of nine hours averaged a 0.5 rating in the 18-49 demographic with 1.6 million viewers. It was renewed for a second season of 13 episodes back in September, a month after the first season finale.

What do you think? Do you like this series? Do you plan on watching the second season on Syfy?

I watched the 1st season and am really looking forward to the second season.

I follow the series very close. Was happy it was renewed….

Just finished binge-watching the first season in preparation for the 2nd. Can’t wait. Love this show!

Love, Love, Love the show can’t wait for the new season to start. I get my fix watching my dvd of last season. Love Tom Wisdom as Michael

I enjoyed the show, and glad that it was renewed for another season.

Bring Dominion back already… I must have more!

So glad Dominion is returning in July. This has become one of my favorite shows to watch. Excellent!!!

Absolutely love Dominion. Archangel Michael’s character is an enigma and that got me hooked up to the show. Can’t wait to see what they’ve got on season 2. Still waiting for Raphael…

I am so excited, this is an awesome show…Great characters can’t wait for season 2 in July.

I love this series and how they changed it for tv. Just as 12 MONKEYS did.
I just hope ANTHONY HEAD has taken some AMERICAN ACCENT voice classes because I almost stopped watching.

Michael change back to his WARRIOR ways and SHOCKED ME.
LOVIN IT.

Interesting show. I hope the writers slow down and build a story this time.
There are some actors that skate through and some that give incredible performances. I didn’t even recognize Anthony Head for several episodes.

I’m anxious to see what they come up with for this second season.