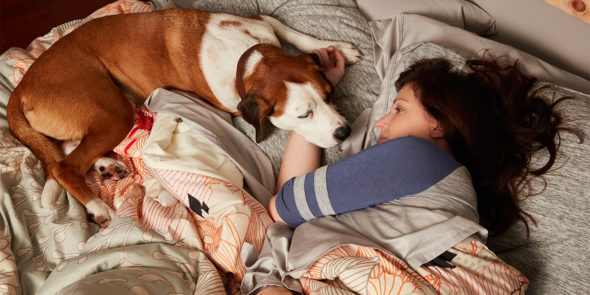 ABC’s had mixed success with their new shows this year, but what about Downward Dog? The TV show just premiered in May and we want to know if you think it should be cancelled or renewed for a second season.

Based on the web series of the same name, the comedy follows the day-to-day life of Nan (Allison Tolman), as told by her increasingly lonely and philosophical dog, Martin (voiced by Samm Hodges). The cast also includes Lucas Neff, Kirby Howell-Baptiste, Barry Rothbart, Siovhan Christensen, Ayden Mayeri, and Andrew Gorell.

Downward Dog has brought in pretty poor ratings for ABC so far. Currently, the sitcom is earning an average rating of 0.87 in the 18-49 demo and 4.40 million viewers. The network held the comedy until very late in the season and produced just eight episodes — likely signs that ABC doesn’t have a lot of faith in the show.

However, even with falling ratings, does Downward Dog deserve a second chance in your book? What do you think? Should ABC renew this canine comedy or cancel it?

Love the show. I hope it comes back. It is very well done.

I love this show. It is so well done. I really hope it comes back.

This is the best show I’ve seen in years. I would definitely watch Season 2.

My husband and I really enjoyed Downward Dog. We are sorry to learn that such a cute, heartwarming show will be cancelled. Please reconsider, at least for another season.

I really enjoyed this show. Made me laugh . I have always given my dogs human emotions, so this show is definitely for people like me. I think it should have been marketed better. No one I know even knew about it until I told them.

Yes, I would watch season 2

I loved it the dog was cool. I would watch it season2

An entertaining, not unintelligent, quirky show. Absolutely watchable and a little disappointed to here it was cancelled. Sad that folks don’t understand a play on words that they would mistake Downward Dog for a prime time yoga show. The educated America is shrinking to only the 1%, I suppose.

I think that the title of the show confused people, as everyone thought it was a yoga show, I think if there was a second season and the right advertising was done to show that this was a really cute show about the relationship between the dog and his owner, people would tune in…I loved it and would watch it for Season 2…and have watched season 1 twice because I was showing friends the series.

I really enjoyed downward dog and would watch a second season if I knew when it was going to be on and ABC didn’t play games with it.

I Loved this show! It was a cute summer replacement show. Loved how the dog and owner interacted; what the dog really thinks about his life! Better than all the reality crap replayed every summer!

I really thinks this series was not given a chance….I want more episodes….

Love that show, my puggle watches the show with me