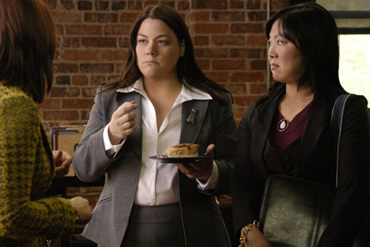 Lifetime has announced that the cast and crew of Drop Dead Diva are back at work on season three. It was renewed for 13 episodes last September. The dramady returns sometime this summer. Here’s the press release from Lifetime…

Currently in production in Atlanta, Drop Dead Diva’s season three opener will once again be a celebrity-packed celebration! Entertainer Paula Abdul (Live to Dance) reprises her role as Jane’s voice of reason to give her some sage advice about her relationship with Grayson.

LeAnn Rimes also guest stars as the estranged soon-to-be ex-wife to a hard-partying celebrity who is on trial for a hit-and-run case that Jane (series star Brooke Elliott) takes on.

Additionally, the premiere episode will feature talk-show host and Dancing with the Stars contestant Wendy Williams as a judge and a musical dream sequence with the cast of Drop Dead Diva, choreographed by So You Think You Can Dance’s Keith “Tyce” Diorio.

What do you think? Are you looking forward to the return of Drop Dead Diva?

I love this show. Wait for it every week! I was worried they cancelled it like every other good show that comes along. Thank heavens it’s back!!!!

Fantastic show. Proves that you can enjoy a show without violence and drugs…cutsy but even my husband likes it.

drop dead diva has it all…….great storylines, drama, comedy, and music! i also enjoy the guest stars. i look forward to each episode. it is refreshingly different than other shows. i am very weary of all those reality shows. kudos to lifetime and the shows writers!

We Love this show,Cant wait for season 3!!

i for one am glad that DROP DEAD DIVA is returning this summer. i wish that it wasn’t just for the summer.

Yes me and many of my friends are looking forward to it.

I am so glad that Drop Dead Diva is in production right now. I am looking forward to season 3. Loved the cliffhanger last season. Thank you for quality TV that is not a reality show. The actors and the story lines are GREAT!!! Keep up the good work Lifetime.

LOVE THE SHOW!! Of course, being a Diva myself, it’s only natural I love the show. SOOOOOOOOO glad it’s back.

Yay I love this show cant wait for it to come back.

Just found this show on Netflix and love it. Had to buy season 2 on Amazon and can’t wait for season 3!

Both me and my husband absolutely love the show! It always ends with such a great “moral to the story” and makes you feel good. It’s about time we had something besides blood and guts spilling out onto the screen. A real feel good show!!!

I enjoy this show. It is not about killing or shooting! Look forward to see it back on TV

yeah it is back

I wish ALL shows like this would “drop dead”.
With programming like this, I would expect radio to be making a comeback any day now.