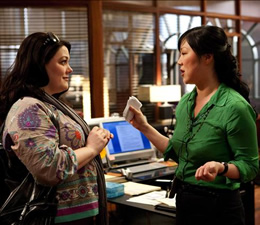 In this dramady, shallow model Deb Dobson may have met her premature demise but the network certainly wants her show to live on. Cancellation isn’t in this show’s immediate future. Lifetime has announced that they’re renewing Drop Dead Diva for a second season.

Drop Dead Diva revolves around a vapid blonde (Brooke D’Orsay) who dies in a sudden car crash. After a short time at the pearly gates, she returns to Earth with her soul placed in the body of a brilliant and overweight attorney (Brooke Elliott). At first dismayed by her new human form, Deb starts to get an education about inner beauty. Others in the series include Margaret Cho, April Bowlby, Kate Levering, Jackson Hurst, Josh Stamberg, and Ben Feldman.

Debuting on July 12th, the series got off to a great start with 2.8 million viewers. It also garnered Lifetime’s best premiere ratings in the key demo since Army Wives’ debut in 2007. Last Sunday’s episode marked the show’s best ratings to date among women 18-49, 25-54, and with 3.06 million total viewers.

Despite the fact that the series has yet to finish airing its 13-episode first season, Lifetime is so happy with the dramady that they’ve committed to make season two.

JoAnn Alfano, Executive VP of Entertainment for Lifetime, said, “Drop Dead Diva is one of those rare gems that has charmed both viewers and critics, and I am proud to announce a season two pick-up. [Series creator] Josh Berman, [Executive Producers] Craig Zadan, Neil Meron and their talented team have delivered an amazing show that is helping us to grow and evolve the Lifetime brand.”

Alfano added, “Brooke [Elliott] is a unique talent who has a wonderful career ahead of her. It is so gratifying to see the public and the media responding so positively to her.”

The season one finale, titled “Greyson Anatomy,” is scheduled for October 11th. The second season renewal is for 13 episodes and they’re expected to begin airing in 2010.

i also love the actress, Brooke Elliott a.k.a Jane.. the way she portrait Jane really touches me.. i really hope there will be season 3 >_<.. Will Grayson die? If Grayson doesn't die, how will Jane cope with Grayson and Vanessa's wedding? Or will Grayson realize Jane is Deb?

I love this drama very much especially the actress Jane. She is cute^^. I was wondering if someone can tell me the opening song of this drama. I love that song too but I could find neither the name or the singer of the song that frustrated me a lot.

I would appreciate if someone name the song, that Jane sang……the one that the boyfriend claimed was their song when the model was alive.

I reallu like this tv show its amazing ..
im waiting for the second seasonnn .. soon i hoee !!
grettings !!
XOXO !!

I love Drop Dead Diva the moment I saw the sneek preview. I told my sister to watch with me but she declined the first few shows telling me it looked stupid. When I made a bet that if she didn’t love the show I’d car pool her kids for a month; my sister went online and watched. Now she is hooked! How can anyone dislike a show that make you laugh, shed a tear and leaves a feel good message. It empowers women of all types without shoving the message in our face. The witty repartee is written with… Read more »

i love this drama so much.. its warm in fact it has all in it.. i m so loving it n cant wait for the upcoming season.. miss Jane already! Sob sob..

I loved the show .