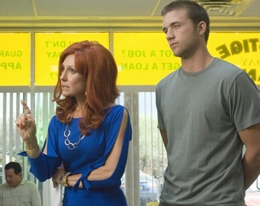 Valentine was an awesome show! It was something that acutally broughtme and my mother back together BRING IT BACK!!!!!!!!!!!!!!

I found the show Easy Money online recently. One of the best shows I’ve seen in a long time. I can’t believe they cancelled it before the season was even over. It’s crazy. Such a great underrated show. If they brought it back I would definitally watch it.

I just started watching Valentine not too long ago, and i really liked it. Found it online since it hasn’t been shown in the country where i come from. Sadly I got really disapointed when i found out that it ended with the 8th episode. It’s so frustrating not knowing what happens next, and even worse knowing that we will never find out…

I wish someone would continue producing the show, but i suppose it is to late now…

i have to watch valentine on line because i don’t have these channels. I bet I’m not the only one so the show is probably getting way more viewers than you think. + Why was it on sunday at 9:00 everyone knows friday and saturday night tv is so boring you might as well go to bed early and its only on nights you need your sleep for school and work that all the good stuff is on. Show your brlliant comedies and sitcoms fri. and sat. dont put them in direct competiton with similar more established shows and i… Read more »

I enjoyed watching Valentine. Certainly disppointed its been canceled. Even got my sisters to start watching it.

This was an awesome show. They should bring it back!

It is really disappointing when shows such as America’s Top Model is compared to a quirky modern retelling of Greek Mythology. Our society is on a downward slide towards the dumb scale . ..

I rather watch Valentine on Sundays then all the Rock III on Sunday or the variety of informercials on this channel. Used to be my favorite.

I watched all four episodes of Easy Money and loved the cast, production style, and writing. Once again spineless CW executives yanked a quality show that catered to adults over thirty. As with Life is Wild, the CW network seems to be unwilling to try to place well-crafted shows in a time slot where they might succeed.

Wish they continue Valentine. I love the love stories and I’m intrigued what will happen between Kate and Danny. Perhaps if they had introduced that love team earlier, they could have a wider audience. Hope another buys it if CW can’t make it work.

I loved Valentine. I was sad to find that it’s not on. It’s the only show I planned a night around to watch. I hope they keep making it and air it online or take it to a network like HBO. I would pay to see that show. It had a sweetness about it that we really need on tv and the actors were worth watching. I hope the CW realizes that people liked it and it just needed some time to catch. I never did see commercials or ads for it so it was not given a fair chance.

I loved Valentine. It was amazingly witty and i fell in love with the characters, yes the plot was a little thin, as they did the same thing every episode. BUT I STILL LOVED IT!

I”m from Portugal and i watch Valentine from the internet and i think that show has a lot of caracter that could became an exelent show never done before.
The aperence of Autumn Reeser on the show has a great value and bring good vibrations for the show.
In my opinian, the show should go on until the end of season.