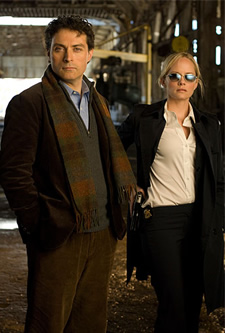 Performers include: Rufus Sewell, Marley Shelton, and Omar B. Miller.

TV show description:
Based on the British television series of the same name, this science-based drama focuses on a biophysicist and Special Science Adviser. He helps the FBI investigate scientific or paranormal crimes that are too difficult for the regular agents.

Dr. Jacob Hood (Rufus Sewell) is used by the FBI as their last line of defense, and he makes sure that those with criminal intentions are kept away from potentially dangerous scientific advances. A widower since the loss of his wife to cancer, he sometimes gets lost in his own mind and doesn’t have very good street smarts. He doesn’t drive well and leaves his handler to do the lion’s share of the driving.

Special Agent Rachel Young (Marley Shelton) is Jacob’s handler, assigned to the FBI’s executive protection detail. She sometimes feels like she’s protecting him more from himself than others. He’s her only friend but she’s often hit on by other guys. Jacob drove away all his other handlers, but she refuses to let him do the same to her.

Jacob and Rachel are assisted by Special Agent Felix Lee (Omar Benson Miller). He actually begged to get the tough assignment and acts as a scout for the team, getting everything ready for the investigation before the others get there.

Why did you cancel this show, please revive this was an awesome series

It’s getting to the point I’m afraid to watch a new show. My husband & I never missed an episode of the Eleventh Hour. It was a great show and really did make you think. Why CBS cancelled it and left the “Reality” shows and shows like CSI Miami on is beyond me.

Now this was another Bright decision! It seems if the shows some opromise of having a different plot than the standard “shoot-em- grisly violence”, audiences can count on it being cancelled.

Eleventh Hour needs to come back. Try a new broadcasting station or time slot. It was a great show. Great acting, great story lines and a lot better than Greys or Desperate Housewives or any reality show. Please try again.

Eleventh Hour was a great show, a far cry from some of the usual non-mind boggling tripe thrown at us day after day, week after week, same plots, same scenarios. At least, it
affords us another hour during which we might think.

Eleventh Hour was an amazing show. I loved the drama and the paranormal aspect of the show. When I found out that it will not be returning for another season, I was angry. I cannot believe the bureacratic attitude that was given to not showing a second season. It should have been given another season so CBS could see how well fans would respond, which I believe would have been a big following. I am totally disturbed that they would replace the time slot for one of my favorite new shows with the Mentalist, of which I have not really… Read more »

Eleventh Hour was sooooo much better than some of the other shows that the network has chosen to keep. WHY on earth would they cancel one that had a decent share of the audience? So what if it lost a bit after CSI, lots of people work at 5 a.m. and don’t stay up that late!!