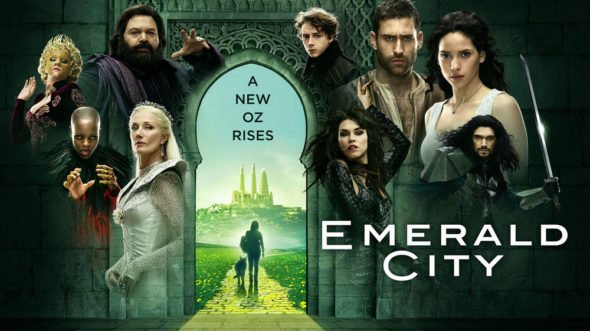 The show was amazing, very disappointed it wasn’t given a little more time to develop a bigger fan base

So sad, I loved the cast and the storyline. Thought it was very well done.

The ratings weren’t good. Friday was its best shot, and it didn’t work out. What is sad is that Shades of Blue got renewed. Now there is a bad show with awful ratings and it got a third season. Who is going to complain to NBC?

This pisses me off. Everytime these networks start a show they cancel it because of low ratings. They never give the shows time to grow. It was came on on Friday of all days. Good grief. Give it a chance it was a GREAT show.

So mad. I sent this email to NBC a while back…
My complaint is that it seems unlikely that there will be more Emerald City. I see the ratings are low. This show was amazing and improperly marketed. The settings, cinematography and costumes were spectacular. The story was layered and got me fascinated with Baum’s original books. The actors were engaging.
I know people who were confused, thinking it was a children’s show. The show is a blend of Game of Thrones and Outlander. It should have been aired on cable and marketed as such.

Definitely a fan of Emerald City. Watched it with my granddaughter. Please renew!!!

That is really too bad.
The acting was very good and the scenery spectacular.
A fine alternative to the multitude of trashy sitcoms littering the TV arena.

This is SUPER depressing. One of the few interesting, unique, well written shows on network TV. Amazing special effects, really cool concept, good acting, excellent soundtrack- just an all around entertaining show that kept you hooked every week. West and Tip/Ozma were two of the most interesting characters on tv in some time. So sad to see their stories cut short. But people can’t handle interesting stories anymore. They want some crappy reality show that they can zone out to for an hour and that’s it. And the networks are on board because what’s cheaper than reality tv?? Or, this… Read more »

Next: Chicago Proctologist. Then Chicago Plumber. Good going, NBC. Now you once again got nothing I want to watch. Emerald City should be on cable–where all the good shows live to see a second season.

I don’t believe networks give new tv shows a chance. It’s easier to cancel them and stick with the old and boring same old crap. I think that the networks are going to start losing viewers on all their first season shows. Why waste my time watching a show that will most likely get cut because the networks ain’t making money hand over fist the first season. Emerald City was a good show. Just like The B astard Executioner, but nope sorry we’re not getting instantly rich off it so cancel it.

That is bullcrap for cancelling that interesting show for no reason been given!

A reason WAS given. The most powerful of reasons. Poor ratings.

I really liked this show! The writers did a great job modernizing a classic story and I was excited to see what was to come. Oz was almost setup to fail being aired on a Friday night. Boo!